THEY HAVE NO DEFENSIVE TACKLES BUT HEY CHARM WILL GET YOU TWO POINTS IN THE MAC. Via Rocky Top Talk, eight minutes of the undermanned but chipper Tennessee Vols goofing around at UT Media Day. Since eight minutes is a lot to ask of any of you, we'll highlight for you:

1:30: Matt Simms admits he hasn't washed his hair in four or five days.

2:28: Gerald Williams leads the D-Line Choir. If you watch nothing else, watch this because it is exquisite.

3:25: Your panties just evaporated at Gerald Jones, but you knew that would happen.

"Cause it's gone be live." If charm were wins, they'd...they'll still win like six games anyway no matter how funny they are, but at least they'll have personality to help them cope.

ADVENTURES IN CAMPAIGN SCIENCE. It is no secret that Alabama is at the forefront of campaign science, having already broken an important barrier in the field by becoming the first state to clearly reject a candidate who threatened to shoot his way into office earlier this year. Genius has no "off" switch, though, and the same political wizards who brought you this have a new innovation to flop proudly onto the boat like a prize boot at the end of the hook:  the gift of an endorsement from Photoshopped Nick Saban.

It appears to be a clumsy photoshop at first, but the real genius will be pivoting off this, claiming Saban had an affair with this woman via a mole on the opposition's campaign, a claim of race-baiting on the opposite side, and ultimately a victory for Dorothy Davidson. All part of the process, you see.

Meanwhile, we'd like to announce that Nick Saban has endorsed us for president. 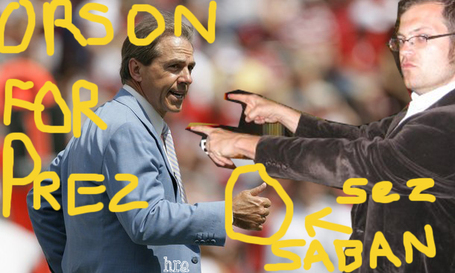 RICH RODRIGUEZ TRAVELS WITH A TOOTHBRUSH, SOME SHAMPOO,  AND HIS OWN PORTABLE CURSED INDIAN BURIAL GROUND FROM BROOKSTONE ONLY $199.99 CALL NOW. By player and position, it is difficult to find someone more valuable by the pound for Michigan than cornerback Troy Woolfolk. Wouldn't you agree, buddy? 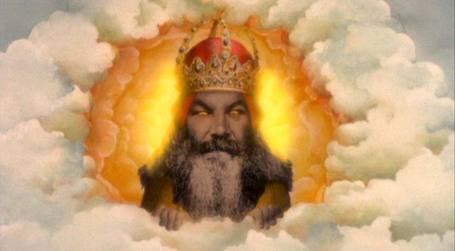 HAHAHAHAHAHA WHY YES I WOULD.

Woolfolk dislocated his ankle and may have ligament damage after catching his foot in the turf during a non-contact drill, thus flatlining any on-paper potential the Wolverines secondary had of stopping anyone this year in straight pass coverage. Michigan will now start a particularly agile walk-on office cabinet at corner, sport walk-ons at safety, and will have to rely on Greg Robinson to coach his ass off under pressure to stand a chance on defense this year. Please reread the last bit of that long sentence. If you have Michigan friends considering suicide--and we all do--do not let them read it. If they already have, begin throwing pillows out the window in hope of cushioning their fall from the roof.

THE BYU NETWORK SPONSORED BY HOGI-YOGI AND LAS VEGAS (WHERE YOU CAN GAMBLE AS LONG AS YOU STICK TO CLUB SODA AT THE TABLES.) BYU may be going independent in football while keeping all other sports in the WAC, though reports in the twin papers (Mormon-ish and non-Mormon-ish) of Salt Lake City are hedging on the "rumors" and "reports" whiel not saying anything definite. This is in stark contrast to the unlikely newsbreaker that is the Colorado State official feed, which reported the move last night was a done deal with a Thursday press conference scheduled to announce the move.

Karl Benson, WAC Commissioner, ain't saying shit, something we will soberly accept as a statement of ongoing negotiations IT'S HAPPENING IGNORE THIS BOLD AND IRRESPONSIBLE TEXT.

DOES NOT COMPUTE REVERT TO COMMENT ABOUT WEATHER. Urban Meyer would refer you to the exterior meteorological conditions for any possible insight as to his opinions on Arkansas and the firing of a reporter because he would say he does not have time for this shit, but that mode of dispensing with irrelevant inquiry in a coordinated public media event has been utilized in an exclusive and definite manner by a fellow coachbot. #Urbz3000onlineandfunctional

WOOOO VANITY PLATE STATE CHAMPIONSHIP. Florida has a substantial lead in the Florida vanity license plate races, but if you included FSU ATV vanity plates we'd only lead by ten thousand or so, since that is a primary form of transportation for many Seminole fans.