THE MOST PRESSURE EVER ON A SINGLE QB? WE DISAGREE

Share All sharing options for: THE MOST PRESSURE EVER ON A SINGLE QB? WE DISAGREE

"He's got more pressure on him than any player in college football history," former Florida quarterback Shane Matthews said.

With all due respect paid to Glorious Gator Nation People's Quarterback Shane Matthews, this may be a touch hyperbolic since no one in their right mind expects John Brantley to be anything like Tebow. We mean this literally. John Brantley eats with his toes, walks on his hands, throws the ball with a complex wriggling of his ears, and still uses dial-up to access the internet. He's completely different in every way right down to the way he cuts his steak. (In zigzags with a ban saw, and no other way or ol' John Brantley's not eating it.)

The most pressure a college quarterback has ever been under is also not a point up for debate. 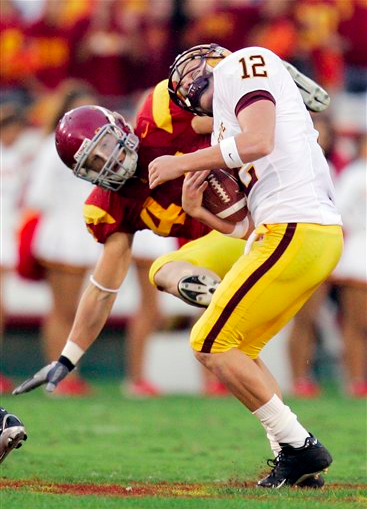 The most pressure anyone's been under ever at the quarterback position is Arizona State's Rudy Carpenter, who was sacked 54 times in 2007, beaten senseless in every game, and is seen in the above picture being kicked to death by a USC defender. Despite having his head ripped off in the 2007 and dying twice in each game against USC, he was revived, filled with plasma and blood supplements, and sent back out to face another vicious thrashing each week because Dennis Erickson was beaten savagely as a youth by a mean bully named Hootie. It rhymes with Rudy, and that was enough to make Dennis feel way, way better about his past traumas. He's been a lot emotionally healthier ever since, man.