YES WE ARE IN A NEWS GAP. When you lead with tales of Derek Dooley's amazing hat, you are most definitely in a a news gap. Perhaps grateful that he is not being asked about a.) Lane Kiffin or b.) his father, Dooley said that yes, his fancy new hat is indeed popular, and very comfortable. Urban Meyer looks scowling at your cowardice, sir: you stare at the sun until either you or it goes away. (Nick Saban wears a similar hat, though the overall effect on him is not what we'd consider a desirable one.)

YES PERHAPS THAT WOULD BE UNPLEASANT.  In the massive losses on the defensive side for Alabama there is one rebound to look forward to: the return of Donta Hightower, the malicious force merchant who missed most of his sophomore season due to an ACL tear suffered against Arkansas.  (Coach Petrino will take no questions from Hightower's repaired ACL, for the record, because it is wearing an Alabama hat.)

His return, according to center Mark Vlachos, hurts. On being hit by Hightower:

"Just something that nobody should ever want to experience."

NO WOO-ING DURING TEXAS TECH GAMES. You may have suspected it, but it is official that Craig James will not be calling any Texas Tech games because he got their old coach fired for total bullshitty bullshit that was total bullshit. In bonus news, no Craig James "WOO!" shall be broadcast during Texas Tech games unless Monsieur Richard Flair is subcontracted into the broadcasts for the fall. (This would be fine by us.)

IN A BIG ANNOUNCEMENT TCU ANNOUNCES THE BUILDING OF A VIRTUAL STADIUM WITH A HOT CHICK AND A DOUCHEBAG IN IT. Teases, all of you. TCU said they had a major announcement, which turned out to be the announcement of a stadium expansion and redo, which is slightly important but not major, sirs.. The interiors look like Prince designed a convention center, but rest assured: plans do include the addition of a very attractive woman and a douchebag to the interiors of every room. 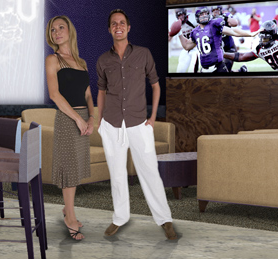 HERNANDO COUNTY'S DANGEROUS STREETS: Florida pledge Ja'Juan Story was arrested for battery, but it was a misunderstanding involving a few ladies having a genteel dispute they planned to solve with peaceful conflict resolution, understanding, and knives and box cutters.

"When I turned around, her and a woman and her two daughters was about to fight," Story said in a text message. "So I came over because there was knives and I took a box cutter from my brother's (girlfriend), but one of the other girls had two knives. I tried to tell her to leave but she wasn't listening."

Mr. Story, to keep your commitment to Florida firm, let us reiterate: WE PROMISE YOU WILL NOT BE STABBED BY A WOMAN WHILE YOU ARE A FLORIDA GATOR. That's just how committed we are to you having a positive experience, sir. Hernando County's dating scene must be real, yo.

HOPE THAT WORKS OUT FOR YOU. Kyle Parker will be giving up about $800K to play football for Clemson this fall, meaning he is indeed very committed to playing for the Tigers, and that the guy who rolls sideways into his knee in a game will be a doublesupermegadick for doing so, especially because he will reduce the value of the South Carolina economy by 8% in the process.

IT COULD HAVE BEEN YOU. Willy Korn executes the rare double transfer, proving himself to be a blue-chip in amassing transfer paperwork, at least. WILLY KORN.