Name last year's national leader in sacks. QUICKLY MAN THERE'S NO TIME. You've likely cheated and gone to the hivemind of the web for the answer, which you should be surprised to find is Von Miller of Texas A&M. Miller claimed a total of 16 sacks last year as the hybrid end in the Aggies' defense, that most annoying and/or fun of positions depending on whether you are an offensive coordinator or defensive coordinator. He did get eight of those in the first three games against some cottony-soft competition, but eight down the stretch ain't bad, either.

Miller is back and will be more hybrid-y than ever before, meaning he likely won't equal last year's sack totals, but will instead play a more "diverse" role in the Aggies defense. "Diverse" is code for "will confuse the shit out of people," a them for Miller in 2010 beginning with his perplexing haircut. 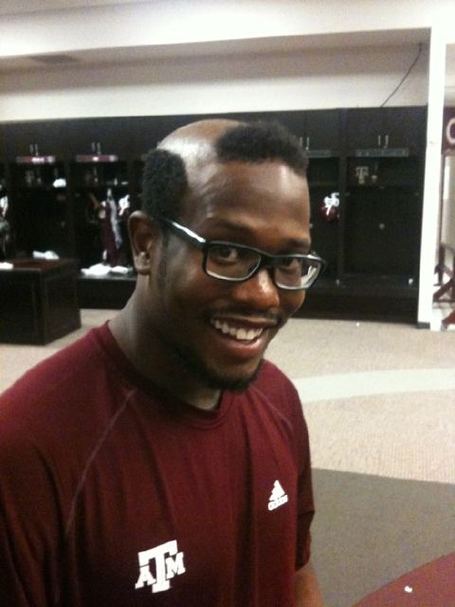 Miller lost a bet to get the 'do, but may have stumbled onto the innovative and soon-to-be-huge "Reverse Fade" in the process. With the glasses and the beard, it's a bonafide look, dude. If Miller gets eight sacks in the first three games of 2010, he may be forced to wear it for the duration. (HT: Reader Clint and Von's Twitter feed.)