I know next to nothing about Werner Gunthor, but this video tells me enough. I know he was a Swiss shotputter in the 1980s. I know he had a rockin' panhandle baby mullet and Krautstache. I know he was a man that enjoyed doing things, most especially when he had a barbell on his back, a pair of tiny shorts or uncomfortably tight sweatpants on his huge body. I know Gunthor appears to be push pressing somewhere over 300 pounds with the help of his twin gay Swiss handlers. (I just assume Swiss handlers are gay, and come in pairs.)

I know that Werner Gunthor enjoyed wearing a speedo, and going to the beach with his friends who also wore speedos. They would frolic and marvel at what a huge badass Werner was, and he would bask in their admiration. They would also politely refrain from laughing when he played tennis and held his racket in his huge hands like a teaspoon. They would cringe in envy at the size of his quads as they watched a platoon of Asian ladies die of exhaustion trying to massage them.

Werner Gunthor, bronze medalist shotputter at the 1988 Olympic games and 70s Big icon, you don't need words to explain yourself. Just a video of you being huge, jumping over shit, and lifting ridiculous amounts of weight with a mustache is enough for us. Zum Wohl!

And now to the Digital Viking...

DRINK.
Holly: We've had a request from an overseas embed to present a cocktail in honor of Russia being in flames, "so [he] can taste something happy while hoping [his] apartment building doesn't burn down." We've got just the thing: 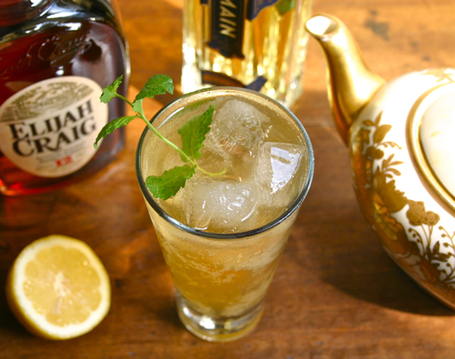 Russian Caravan Cocktail (by Vitaliy Bukhtulov)
makes one cocktail
1 1/4 ounces bourbon (Vitaliy used Elijah Craig 12 Year Old)
1 ounce pine-smoked black tea, infused with a bit of honey while steeping, then chilled (Vitaliy used Russian Caravan by Choice Organic Teas available at Whole Foods. He cautions not to over-steep it lest its strong, smoky flavor overpower the cocktail.)
1/2 ounce St. Germain Elderflower Liqueur
Splash of fresh lemon juice
Club soda (for topping up drink)
Combine all ingredients except for the club soda in a cocktail shaker with ice. Shake well and strain into a chilled glass filled with ice. Top up with club soda and garnish with a lemon twist.

[We also tossed in some sprigs of pineapple mint, with pleasing results. --ed.]

Orson: The Gin Rickey. Named for Colonel Joe Rickey, a man known as "a gentleman gambler." Those were better times, when a man could vomit on a faro table, renege on a blown bet, and still keep his pristine reputation simply by buying the entire bar a beverage. Just try and do that at the Bellagio and see what they call you afterwards. #hardpersonalexperience #shoudlhaveofferedmorethanbudlightallaround

The Rickey was, like most great cocktails, a mistake and then a variation on that mistake. Colonel Joe (rank and term of service not specified deliberately) like a constitutional of Bourbon, ice, and sparkling water. This being the 19th century, the drunk bartender handed the drunk customer a drink with lime randomly added into it, and the Colonel declared it to be "as delicious as any beverage not containing the blinding but savory gutter-whisky of my beloved Kentucky home." He the completed this sentence by vomiting, a common punctuation in those days since the average American over 15 consumed two bottle of whiskey a week.

(This country was, at one time, stinking fucking drunk 24 hours a day. Bars were sometimes referred to as "resorts." Born. At. The. Wrong. Time. Also, Colonel Joe was from Missouri, but facts were loose and fast in the 19th century.)

The bourbon version was somewhat popular, but once someone swapped out gin the natural sexual chemistry between lime and gin exploded, and the Gin Rickey was born. Simple, light, and bubbly, it goes like this:

Squeeze in 1/2 lime and drop in the rind.

Top off with chilled club soda or seltzer.

The Esquire recipe also mentions this quotefrom a British war correspondent, who being British and a war correspondent instantly has more alcoholic cred than you can develop in eight decades of drinking.

"spreads blessedly through body and spirit...it is soil in the sand, substance in the void, life in death."

Did you read that? THIS COCKTAIL WILL BRING YOU BACK FROM THE MOTHERFUCKING DEAD. Endorsed, and approved. 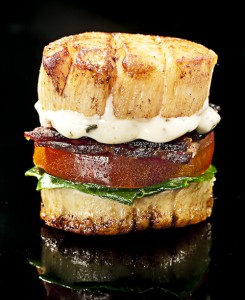 You have to get some royally plumpish to obese scallops to grill them, so in the likely event you're pan-frying them and want that spectacular brown sex-crust on both sides do one thing to get it: use an unreasonable amount of heat for a short time with oil. If you're doing it right, it should almost be smoking a little bit when you do it. Rereading that last sentence, we rely it applies to so many of the good things we do in life.

Holly: One of the finest inventions of our erstwhile 213 stabbing grounds, the French Dip originated at Cole's or Philippe's, depending on who's buying drinks. Our allegiances lie with Cole's, thanks in no small part to the genius bartenders and the fact that it abuts our own personal happiest place on earth.

About this time last week, we had the privilege of introducing the rest of the EDSBS wrecking crew to its sublime majesty. (True story: Fearless Leader got there first, ordered a sandwich, had a cocktail with the rest of us when we arrived then ordered another sandwich. They are irresistible even to the staunchest constitutions.) 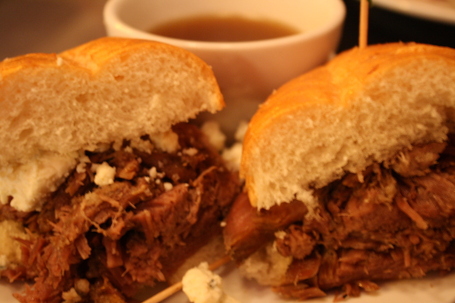 The jus is hot and fresh. The pickles are spicy enough to require consumption a tiny nibble at a time. And the bread is sturdy enough to withstand frequent dips without crumbling into a soggy mess in the ramekin, yet won't give you a jaw-ache to gnaw on. We like ours with lamb and blue cheese, because ordering a "baby sheep sandwich" makes us smile.


If you're going to learn to shoot anvils 200 feet into the air, learn from the best. That's what my old grandpappy always said.

Orson: From the immortal Armed and Dangerous and the category of "Things We Wish Were Real," the Landshark Gun.

The Chronoscepter from Turok, The Dinosaur Hunter may have had more thump, but it did not result in people being eaten by sharks and therefore loses.

Orson: The most abused, contorted, and maliciously rearranged car brand in the world may be Volkswagen. Perhaps it was its simple design; perhaps it was its tiny size, which practically begged garage Frankensteins to solder, weld, reweld, tear out, and otherwise mutate them into forms much more perverse than that their makers intended. Perhaps it is the satisfying noise and side-splitting profile they make when screaming around rally curves, flying off ramps, or otherwise doing things a box 1990 Golf or STI should never think of doing.

Cruel? Yes. Resulting in amazing things like a car that can flip itself and not explode into a thousand flaming pieces? Ditto, partner.

Rednecks remain a tribe without borders, loyalties, or any sense of proper time management, and for that we raise a hundred cocktails in their honor.

Holly: Back in the age of flappers and speakeasies, the ultimate automotive status symbol was not a big-ass SUV, nor anything built by those scheming Krauts, but rather the Duesenberg Model J, constructed by God-fearing Americans in Indianapolis. In supercharged form it could crack 100 mph in second gear, which prompted the saying "The only car that could pass a Duesenberg was another Duesenberg, and that was with the first owner's consent." 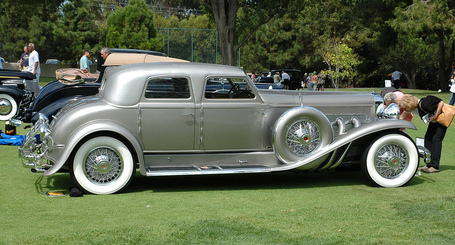 The type reached its pinnacle in 1933 with the model seen above, custom-built for the Chicago World's Fair and nicknamed the "Twenty Grand" after its sticker price (at a time when the average American's annual income was around $1,500). If cars these days followed the same naming convention, I'd be driving a Dodge Shut Up It's Paid For but looking to swap it for an Audi More Than You Can Probably Afford, Diamond Jim.

Holly:  Bubsy. Whatever, we all had childhoods, and I was Team Sega from the crib, lawya. My sainted mother foisted a box of ancient gadgetry on me the last time I went home, and contained therein was my precious Genesis 3 console, Earthworm Jim (holla!), and this glorious cartridge. We have not been able to stop playing it since, even occasionally jumping in while completely sober. It's a 2D platformer and never aspired to be more (we do not speak of the 3D PlayStation iteration of horrors), but this was some lush shit for the 90s. 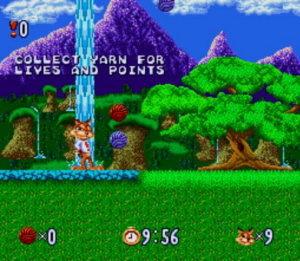 Alpine waterslides, marauding roller coasters, twangy mountain logger music, evil aliens with hay fever, the surprisingly addictive ability to leap across an entire level in three bounds if you do it right, and yarn balls everywhere, all in the service of defeating the evil queens of Rayon, Poly and Ester. This all before the sequel, where the assorted baddies include musical instruments, kangaroos dressed like Robin Hood, and dirigibles with pig snouts. (I know. If you think about any popular game from this era for too long, you start to wonder whether you really licked enough toads in your formative years.)

Orson: The Game. Fess up, Eli Roth. You stole the creepy clown idea from this movie, didn't you? 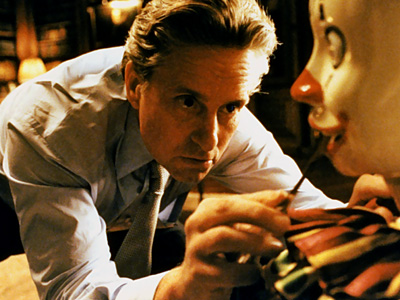 There is a certain type of film aiming do to nothing more than stress the viewer to the breaking point while paying only the slightest attention to plot, reality, or details. Coincidentally, this happens to be one of my favorite forms of movie, which explains why I liked Inception so much despite zero interest in the main character, plot holes the size of dam drainage tunnels, and a general wanking in Leonardo Di Caprio's direction. There's a hook a big concept, and if the director is doing it right an hour or two of whoooooosh before the formality of the ending.

That ending at its best should be a Hitchcock ending. It should come, tie everything together in a tidy bow, and somehow still leave you feeling disturbed at everything that came before it. When you get to the end of The Game, Michael Douglas is alive, intact, and preparing to have dinner with a sexy lady. That's a spoiler, and it's not. Telling you the end of The Game does nothing to deflate the movie because as with most good movies the ending is and always will be the ultimate fiction, an arbitrary checkpoint in the action.

This is why M. Night Shyamalan's movies are so uniformly horrible: they revere the ending. This is bullshit in a thousand directions, and why David Fincher always manages to leave you walking out of the theater ever so pleasantly traumatized. The Game is about Michael Douglas trying to survive something he willingly puts himself through, endings and consequences be damned.

There is no resolution. There is no better, or closure, or catharsis. There's only the horror of going from scene to scene. Even at its most fantastic, a really good David Fincher movie like The Game is among the most lifelike of movies, and thus explains the nervous hangover I've gotten from watching every film he's done. It's a bit too lifelike for comfort even when being completely unrealistic in its execution.

(Except for Seven, because ooh the serial killer's trying to tell us something is mega doublefart lame, and Gwyneth Paltrow's head in a box on screen is comedy, not tragedy.)