FULMER CUPDATE: THE HOME STRETCH MAY FORCE A TIEBREAKER

Share All sharing options for: FULMER CUPDATE: THE HOME STRETCH MAY FORCE A TIEBREAKER

The Big Board today is brought to you Brian, who like Reggie Nelson had a cameo in the Halo video game series. Remember the big ring planet that is the "Halo" referenced in the title? That is in fact a loop made of his member, with Nelson's playing a supporting role as a second wang-loop planet later on in the sequels. No, we will never run out of different ways to say this.

Apologies, clarifications, and insults hurled drunkenly at the crowd follow. 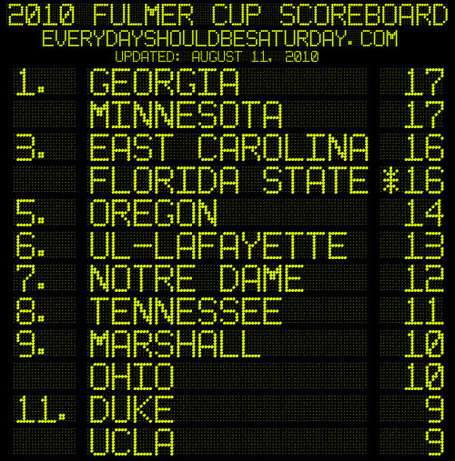 A CYCLONE OF CREDIT CARD FRAUD. David Sims of Iowa State needed cash fast. He should called 1-800 SellYourFillings.com. Are you aware of the mineral wealth just lurking uselessly in your mouth? Have you considered what untold riches lie in you teeth, bequeathed to you by your parents? It's like the inheritance you chew with, and who needs functioning teeth when you could have COLD HARD CASH IN HAND.  Get your home extraction kit NOW and we'll throw in a free ten dollar credit at our partner site "Smoothie World," home of the Liquid Porterhouse!

OPERATORS ARE STANDING BY!

Sadly, Sims decided not to take advantage of the fastest growing business in the Des Moines area, and instead decided on using someone else's credit card illegally. One point for the Cyclones in the Fulmer Cup, brought to you in part by SellYourFillings.com

OFFICER, BEING DRUNK IS LIKE BEING CONCUSSED. AS A FOOTBALL PLAYER I CALL THIS "FAMILIAR." No arguments worked for Victor Johnson, as the Oklahoma State CB (arrested for weed the prior week) earns a one point repeat offender tag for a two point DUI pickup, thus giving Mike Gundy's Cowboys three points total.

KICKER GOES WIDE RIGHT OVER THE CURB, WIDE LEFT OVER DOUBLE YELLOW. A tipsy motoring escapade earns Nevada three points, which should not surprise you because people in Nevada can drink like no one outside of Wisconsinites.