Share All sharing options for: ALL HAIL THE MEAT-BALL

Us: Why, I do think a historical dramatical take on Stephen Garcia's ageless wanderings through history as both a man and a woman, a la Woolf's Orlando, would make for some jolly riffery on the current state of the South Carolina football program! What say you, Magnus?

Magnus: [smiles, shits explosively through second onesie of the day.]

So it's not perhaps the most productive setup, but Magnus pooping on us is certainly better than a "MEH" any day. Fortunately our readers keep forging the limits of football season prep in every direction. DId you know someone in Wisconsin is about to make more money? Did you know it's because you're about to order ten of these for the fall? 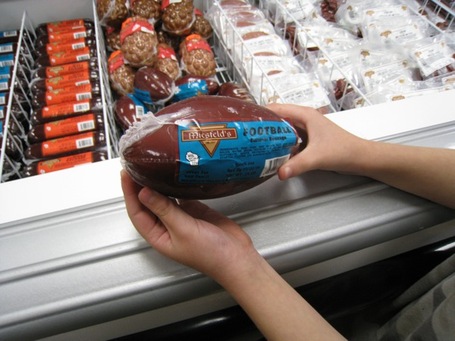 Meat-bros, unite: we have a new leader, and he is sausage football. This idea brought to you by Wisconsin, the makers of American Binge Drinking As Profession. Make one in the shape of Nick Saban, offer it on your website, and Miesfield's will be the equivalent of a Federal Reserve Bank in a matter of weeks. (HT: Dave.)