SING HIM A SONG HE'S THE PIANO MAN. Christian Ponder's Heisman campaign site has his "playlist" posted on the sidebar, and it is further proof that if you are riding along with a college athlete and they say, "Hey, can we listen to my iPod?" the answer is "HAIIIIIIL NAW" no matter how much they ask. It has "Piano Man" on it.  This is all you need to know.

The site also has this weird bit of graphic terror: 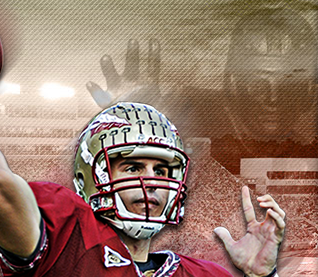 HOW DO YOU SAY NO THANK YOU WE'RE FULL? Yeah, Tennessee turned down a matchup with USC in the Chik-Fil-A Classic because they're cowards, they're scared of the Lane Train and can't TAKE THE PAIN, because they're pussies who---

--or, yeah, it could be that, Mr. Wes "I'll use facts and stuff" Rucker. Responsible journalists, ruining the fun for everyone.

DON'T CALL US SERIOUSLY DON'T CALL IT'S KIND OF SORT OF VIOLATION-Y.  The improper conduct between Dillon Baxter and Florida may have been initiated not by Florida, but by Baxter, who allegedly contacted UF assistant Brian White when he was in California recruiting. GatorCountry suggests that cellphone records might be interesting, but that's just...it's too "Arkansas-fan-crazy" for us. That's their signature move, and we prefer to keep "throwing bags of urine" as ours. It's a matter of fraternal respect between SEC fans at this point.

HE'S GOING SOMEWHERE, WE GUESS. Jeremiah Masoli will not enter the NFL supplemental draft, and will be going somewhere for college football playing time. If he somehow does consider Mississippi State--a rumor debunked by Masoli's family last week, but still--run for the fucking hills, because Dan Mullen with a Polynesian Tebow is NOT something the SEC West wants to see loose in their linebackers.

PATRICK PATTERSON'S CAREER AT OLE MISS IMPLODES VAGUELY. Pat Patterson is done at Ole Miss for "violations of team rules," which under Houston Nutt could mean anything from "murder" to "refused to participate in Hawaiian shirt day."

EXCELLENCE IN CLOCK MANAGEMENT. It's like the old State skit where Mr. Highbrow talks next to Mr. Lowbrow when you pair Les Miles' clock management next to Air Force's commando special teams unit: hilarious, and yet kind of frustrating (especially if you're an LSU fan and can count to ten.) (Stop it.)