WHERE WE COME FROM: TAILGATING TRADITIONS

Share All sharing options for: WHERE WE COME FROM: TAILGATING TRADITIONS

This post is sponsored by EA Sports NCAA Football 2011*

Florida remains too diffuse a mutt for us to have the kind of monocultural solidity needed for a Unified Theory of Tailgating. The original invasive species in the state is humanity, and even the various kinds of human python who invaded the state in waves tend to view the others with suspicion and competitive envy: the Cubans from Miami, the old crackers who parlayed orange groves into real estate millions and Bull Gator spots within pissing distance of the stadium, the Midwesterners who flocked to Tampa and Orlando to escape winters and income tax, the ACRs (Alachua County Residents) with 24 packs of Busch Light propped on truck tailgates, the Subtropical Jersey Shore kids from Broward County whose hair products start to wilt in the heat of the third quarter, the panhandle rednecks who could pass for Bama Bangs Commandos...there's too much "us" in our "we" to have The Grove, or the Quad, or especially something as coordinated and spicy as the LSU Rolling Cajun Kitchen. 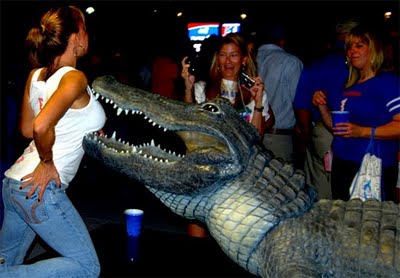 That's not to say there aren't a few universals for Florida tailgating.

BLIND DRUNKENNESS. The cruising beverage goes in the right hand, and when hard drinking (i.e. "real" drinking") commences, it moves to the left hand and is nursed until the "real drinking" ceases. Like the mating habits of our fans, indiscriminate is the word for choice of drink. We have personally consumed the following at Florida tailgates since 1994, and have noticed no pattern of beverage choice across this significant sample size:

In short, Florida fans will drink anything that doesn't run out of a gutter, and will drink out of a gutter provided you're out of everything else. Just keep the cruising beer in hand, because the beer is for hydration, not intoxication. On a good gameday a Florida tailgate can look like a teenager raided Dad's liquor cabinet at random and threw it onto a camp table with bags of Doritos and orange-and-blue-frosted cupcakes. The results of all of this viewed in retrograde after the game would, if caught in slow-motion, qualify as some of the most moving and disturbing performance art of this century.
SOME FORM OF FRIED CHICKEN. There are those Florida fans who splash out for real food prepared on site. They exist, and we don't disparage their efforts, especially the Cubans and Jamaicans from Miami who actually put some effort into this shit. The greater majority of Florida fans, though, show up at a leisurely fashion on Gameday on campus with prefab stuff. In that prefab, there is usually some variation of fried chicken, and it usually comes from Publix. This is not a complaint, because after six or seven beers the soul cries for nothing more than the holy union of batter and chicken united by hot oil.
It is an accurate depiction of the leisurely pace of Florida tailgating, though, that half the food is usually thrown in the back of a car on the way to the tailgate, which you begin not at the ungodly hour of eight, but somewhere around ten or eleven for a 3:30 game. (It's hot and no one's moving quickly even for football's sake.)
A RATHER LEISURELY WAY OF DOING THINGS. The sole focus of all effort on Gameday is the game itself, where Florida fans will adopt circular breathing, scream continuously for three to four hours, and leave as hoarse, diminished shadows of themselves. Before that, however? Tranquilo, sirs and madams, is the key: satellite tvs set up in front of a semi-circle of chairs, some mild taunting of the opposition, mild grazing of the grub, and if things get especially frisky a game of touch football on Flavet Field.
(This happens to be one of our favorites, both because total strangers tend to just walk right into the games without issue, and because we've actually called Spurrier plays by their name and had people run them. This only happened once, but looking at another dude, saying "Lonnie," and having him run the post route against the safety was something we wish we had a commemorative portrait of in our living room. Also, @eyeballslicer of House Rock Built once full on tackled us in a touch game and actually upended us ass over teakettle without warning in front of a stunned audience. It was the best hit a Notre Dame defender has made since 1997.)
Gainesville on Gameday doesn't measure up to any of the SEC classics, but it's hot out there, and there's people all over the place, and people in a hot, contested space are always the problem. Floridians build their houses far apart from each other, carry AK-47s as personal protection, and regard each other with a fair amount of suspicion on the best of days. Gameday's one of them, but even then we like to spread out just in case that guy over there gets any ideas about horning in on our chicken fingers.
You see him. That guy. The fat guy in the sleeveless t-shirt.
No, THAT fat guy in the sleeveless t-shirt.
/drinks from right hand
/drinks from left hand
/opens up five buttons on a Hawaiian shirt
/sweats
*Get money.