Short this week, and a repeat, but it's his birthday today so what the hell. Our Patron Saint did nothing: the pavement was his enemy.

Arnold also is the man behind one of our favorite anecdotes ever:

My friend played in a Pro-Am with California Gov. Arnold Schwarzenegger. They introduce themselves and walk up to the first tee. Arnold has this huge cigar in his mouth as he puts the tee in the ground and asks my friend, "When was your last blow job?" My friend chuckles a little bit and says, "A couple nights ago, I guess." Arnold doesn't say anything, pulls back the club and mid backswing (in his "Terminator" voice) asks, "How did it taste?" and swings through and shanks the ball 50 yards dead right out of bounds.

A legend, a pig, a roast all to himself. Happy Birthday, Running Man. 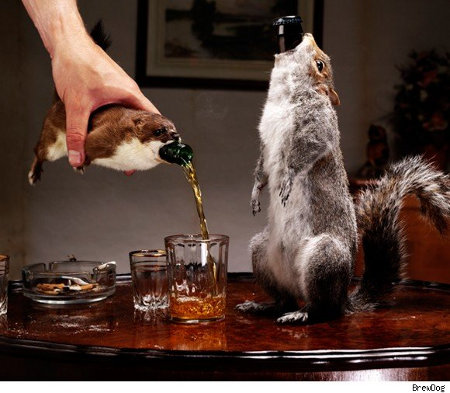 Introducing 'The End of History', a 55% ABV beer that costs $765 per 12oz bottle AND COMES IN ITS OWN TAXIDERMIED KOOZIE.
[...]
This blond Belgian ale is infused with nettles from the Scottish Highlands and Fresh juniper berries. Only 12 bottles have been made and each comes with its own certificate and is presented in a stuffed stoat or grey squirrel. The striking packaging was created by a very talented taxidermist and all the animals used were road kill.

Orson: We have had requests for gin, and therefore grant them with the best-named cocktail ever, The Suffering Bastard. The Suffering Bastard combines so many evocative semantic threads: invented in Cairo, it's essentially a colonial drink of the most British of designs, a gin and ginger beer mix concocted for hangover remedy and creation.

Shake everything, except ginger beer, with ice. Stir in ginger beer and pour into a double old-fashioned glass. Garnish with orange slice and sprig of mint.

Again, don't short on the bitters, which is a temptation because keeping bitters around is such a pain in the ass, but it really does keep the thing on balance. It also lends the fortifying constitution-building effects all mock-medicinal drinks claim to have when they have something other than pure booze in them, but don't be fooled: this is a drink that works like the best ones. It gets you drunk, and does it as quickly as its bastard cousin The Moscow Mule does. (If you're looking for medicine, we recommend Colden's Liquid Beef and other fine products listed there.)

Orson: Sandwiches have always seemed so...work-y to us. Problem solved with The Candwich, the sandwich in a can. 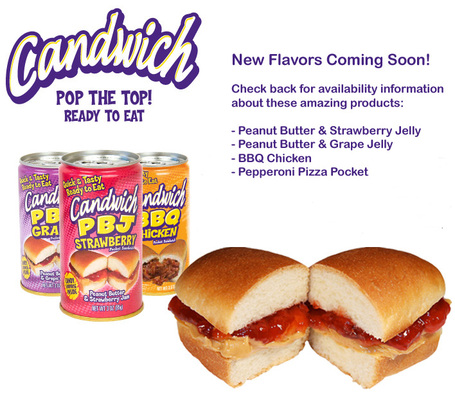 Order now and they're throw in their new product the BREADTINI, the martini in a bun for the drunk on the go AT NO EXTRA CHARGE. Eat eight of them, pile the cans at your feet, and then gaze upon the mass grave you've made of the remaining population of Your Dignity, Republic of You, Dude.

Holly: Submitted by one of EDSBS's own West F'ing Virginny correspondents, we proudly present the sublimely-titled Apple Butt: An all-day, while-you're-at-work-or-watching-football slow-cooker recipe for delicious pig.

The night before:
Trim the excess fat from the butt, remove the bone and place in a crock-pot.
Mix the marinade and add to pork.  Add more liquid to cover pork, if necessary.
Refrigerate overnight.

The next day:
Set the crock-pot on LOW and cook the meat in the marinade for 8-9 hours.
Remove the meat and shred.  Reserve 1 cup of the cooking liquid and clean the pot.
Return the shredded meat to the crock-pot.
Add the applesauce and spices, stir well.
Slowly stir in the reserved cooking liquid until you get a consistency you like.
Cook on HIGH for 20-30 minutes to heat applesauce.

Holly: If anyone needs me, I'll be moving to Phenix City, immediately, the better to learn at the feet of the Georgia-Alabama border legends, Mesdames Bang-Bang and Boom-Boom.

Orson: The Mini Countryman, coming to your yuppie neighborhood in 2011. 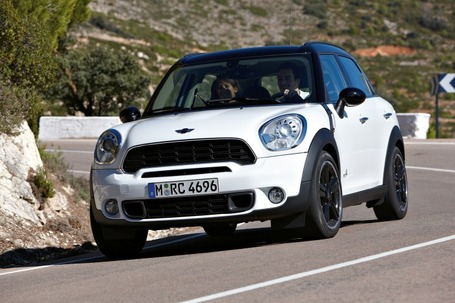 Awwwwwwwww shit. You gasp: IT'S AN SUV. Screw that: it's the car Mini's taking back to rally car, meaning it's the car we're going to wrap around a telephone pole after a week at Team O'Neil's Rally Car School in New Hampshire. Net cost of school and the car? Over 38K by the time we're done, but that one moment of glory powersliding in front of the Georgia state capital before hugging a lamppost with our precious new car will be so. Worth. It. All options please, and no, we won't be taking the additional maintenance plan because totalling a car means you have finished it, and we plan on finishing this car.

Holly: Almost ever since the internal-combustion engine was invented, gearheads have gotten their jollies off of yanking them out of cars and putting them into other cars. Big-block Hemi in a Plymouth Fury wagon? Been there, done that. Taurus SHO engine crammed into the trunk of a Ford Festiva? Er, less common, but that's been done too. Rolls-Royce turboshaft engine from a Bell Jet Ranger helicopter on a motorcycle? OK, now we're finna get in some shit. 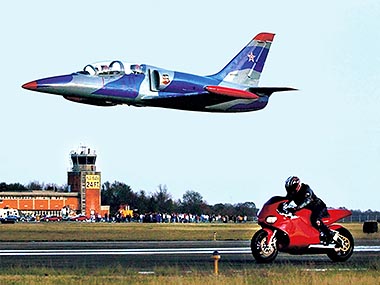 The MTT Turbine Superbike costs $180,000, redlines at an awe-inspiring 58,000 rpm, and at a top speed of 270 miles per hour, will allow you to look death in the eye and not only laugh but give him a wet willie. Meanwhile, your friendly local accidental-death-and-dismemberment-insurance salesman would like to talk with you at your earliest convenience, as your monthly premiums following a purchase such as this will put each of his kids through college.

Holly:  Le Dîner de Cons. Look, I know what a complete asshole I sound like when I say OH YOU MUST SEE THIS MOVIE IN THE ORIGINAL FRENCH, but please trust me: Save your multiplex dollars, skip Dinner For Schmucks this weekend and rent the film it's based on. (Also: "Schmucks?" Is that the best they could do? It's the title of the play the film itself was based on, true, but let us always strive for improvement, as the Fransh did here: You'll find the 1998 original on Netflix as "The Dinner Game," but according to our French auntie, a more accurate slangy translation of the title would be "The Assholes Dinner.")

ANYWAY. This is a LOLsome French farce starring Thierry Lhermitte, who's done some regrettable work stateside but who sparkles in a most surly fashion here as a guy charged to bring the biggest jagoff he can find to a weekly dinner with friends. He throws his back out before he can get to dinner with his quarry, however, and before the night's done his designated asshole has managed to trap him in his apartment with (in rapid succession) his wife, his mistress, his ex, and an tax auditor. Even if you're just reading along with the subs, I personally guarantee more belly laughs than you'll find seeing Starring Steve Carrell, As Himself, Again. (A final plea: Jeff Dunham is in the new one, presumably with a puppet. Anathema, we say. ANATHEMA.)

Orson: HYSTERIA BY DEF MOTHERFUCKING LEPPARD.  I know this is a sensitive subject, but when I see a bunch of dicks on the third rail, I like to saddle up and put my own on there just to share the voltage. (First instinct: throw bucket of water on rail. Second: put own penis on rail. You have to have options in life.)  If a topic like this aggravates passions to the boiling point and causes some steam to be let off here, then fine. We didn't come in the kitchen for the cool weather, and we don't live in society's digital porno booth for the long hemlines and high collars.

Hysteria is such a better work than Pyromania. It's not even close, and I did say work, like a Brahms symphony, a statue by Bernini, or a Nike commercial by Wieden and Kennedy. It's got the time-intensive obsession associated with great works, and the distinct feel of something made in its time, a kind of late 80s early digital feel with sequencers, hissing cymbals, tremolo'd guitars echoing to the ceiling, and vocals stacked so deep and high it sounds like a hammered Xenu is reading off heavy metal cue cards in your ear.

Do you hear fat-breasted women of dubious character and definite drunkness releasing the clasps on their bras and airing huge glorious breasts of rock? Did you hear them doing all of this in the frontseat of a Dodge Sunfire in a cloud of Marlboro Light smoke? Is Phil Collen wearing a sport jacket  and no shirt and leaning on the tremolo bar mercilessly while standing on the hood and giving the mulleted man handing those breasts advice? Is Rick Allen beating the shit out of his girlfriend with one arm on the side? Are dead Steve Clark's legs sticking out of the trunk? If they are, they should be wearing white jeans, because if they're not we have no idea who that is, and you should call the police.

You're seeing all this? Oh, well you must have turned on "Animal," because that is precisely what this song looks like in our mind.

The first half of Hysteria alone contains every song one would need for living.

"Rocket": It's ostensibly about glam rock, but it's more of a mission statement than anything. "ROCKET! YEAH!" is pretty much the way you should live your life, and informed the early work of Andrew WK more than he'll ever admit.

"Animal" It's about the cool stuff you can do with women, like fucking.

"Love Bites" It's about fighting with women, unless "love" refers to Ted, the guy I stabbed at a convenience store for biting me in the parking lot after I refused to buy him drugs. Actually, that makes the song even cooler.

"Pour Some Sugar on Me" Made up with the girl and IT'S SEXY METAPHOR TIME.

"Armageddon It": Blow up the world, skip back to song one, and repeat. It's the circle of life, and the album's NOT EVEN OVER.

There's a whole other half, and way more ownage per square second than the four song EP with filler that is Pyromania, an album that can only claim album art and the fear of fundy kids' parents for the opening of "Rock Of Ages." Even then you can claim the whispering in "Love Bites" is Satanic, and that "Armageddon It" is about the devil. Fundy kids' parents believed anything, and if they didn't fear it you didn't want to listen to it.