JUST A REFRESHER COURSE, BECAUSE YOU'RE GOING TO NEED IT.  A classic, but well worth revisiting. It's missing some things, sure--there should be  a whole insane substream about how or how not to argue with an Alabama fan, but that leads down a horrifying loop that ends in Les Miles sentence-diagramming madness. Nevertheless: study it, and study it well. 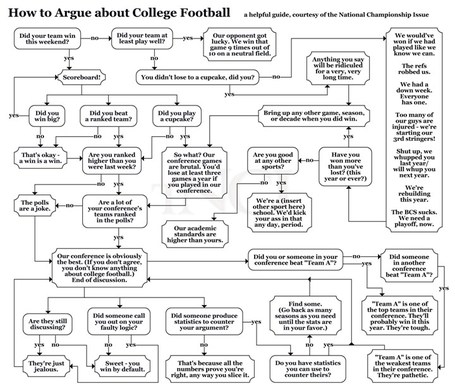 IMAGINE A MEDIA MEMBER BEING USED BY A LARGE SCHOOL. Larry Scott has reasons to do this: after all, his grand scheme to create the PAC-16 did fail, though not before scaring the daylights out of college football as a whole and forcing the Big 12 to make $20 million promises it can totally keep, man (if you'll just give it a few days.) That said, him coming right out and saying Texas leaked expansion plans as the Pac-10 offered them to the Longhorns lends some credence to the theory that Texas wasn't going anywhere, and just wanted to use the threat of an imploded Big 12 to knock an even bigger spot on the cash-couch for its voluptuous ass.

It also means Chip Brown got played and played hard by Texas, but so did we all. /philosoraptor pose

OOH YAY PAC-12 MEDIA DAYS. My, that still feels odd to the touch to type. The Pac-10/12 Media Days can be easily skimmed thanks to Cal Golden Blogs, who described Dennis Erickson as "a real hoot" and politely did not mention the beer in a coozy he kept under the table.  Ted Miller asked Washington State coach Paul Wulff "How did you feel after finishing tenth again last year?" Ted Miller is a stone cold killer, and don't you forget it.

The assembled media barely picked Oregon to repeat as Pac-10 champions, which is a silent plea for help indicating that like the rest of us, when pushed against the wall of prognostication, the media reaches for the last gun in their holster that fired a bullet.

PUTTING THE G IN GARDENING. Vince Dooley wrote a book about gardening, meaning he's an even chiller bro than you think he is because it's hard to be chiller than a gardener. Plants can't be aggro, man. Dooley joins Pat Dye and Johnny Majors as gardeners in their retirement.  (Both specialize in raising prize whiskey blossoms that are the envy of all who behold them at the county fair.)

OH, HALLO CLEMSON: Next up on the NCAA's agent contagion survey: Clemson.

IF YOU READ NOTHING ELSE TODAY: The Onion takes what you do that they did ten years ago better than you ever did and then does it better.