THE PAC 10 REBRANDS WITH WESTERN MOUNTAIN SURFISH STUFF. if you rotate it 90 degrees to the right, it kind of looks like an angry yelling cartoon face telling the PAC to talk to the hand. 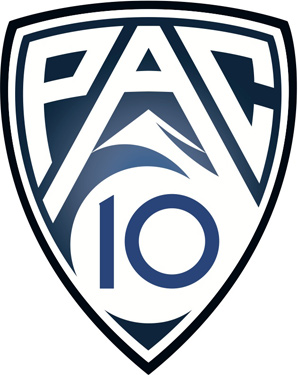 It is snazzy enough, and an improvement on the bland "Conference of Spikes" logo they didn't use on fields, jerseys, or anything else until Larry Scott got there and realized that his predecessor, Tom Hansen, was still relying on the lucrative telegraph rights of games to come through in order to bolster the conference's finances. (This television thing will surely pass, just as jazz, fizzy drinks, and the horseless carriage did.)  Mock Scott for overreaching with the Pac-16 proposal, but the man was pitching a space-age idea from a biplane, apparatus-wise, something Andy Staples details nicely in his piece on Scott's revamping of the Pac (not Pacific) Ten. Care to know why you were missing some of the fine football played on the West Coast? The Pac-10 demanded more money to "mirror" games on ESPN alternate networks, and thus missed broadcasting their product to half the nation. They no longer do this because they have decided to "give a shit," which while not listed in Staples' article is certainly on their slate of things to do.

We're not so sure about their eyeing Asia as a growth market, though the formation of Competitive Smoking Teams would certainly appeal to the China markets. You'd die trying to beat them, but sometimes competition is about sacrifice.

AT THIS POINT YOU CAN'T POSSIBLY BE SURPRISED. Lane Kiffin and USC are being sued by the Tennessee Titans, but you already knew that, or at least some part of you in your bones saw this, realized it was inevitable, and then nodded as you heard the gears of the universe click in place. Kiffin will be defended by himself in court, where he will end up in contempt of court within three words of opening his mouth, and then will be beaten in a holding cell when he pisses off his cellmates in the first five minutes of his stay. He will then be released on bond and fall dick-first into a gutter filled with money and beautiful women, because this is what seems to happen to Lane Kiffin.

LINT ROLLER IN ONE HAND, HOPE IN THE OTHER . Maurice Clarett is re-enrolling at Ohio State, and this is said without an ounce of snark: we sincerely wish him the best, since anyone who can lie with Israeli gangsters, end up in prison, show up drunk to NFL tryouts, and somehow survive has to have some nugget of the indestructible and enduring in him.

OHHH, SWEET PLEASURE. The ACC Preseason poll has been incorrect in picking a conference winner since 2005. Oh, Carolina March. Please tickle our ivories.

The ACC media hasn't picked the correct winner of the Atlantic Division since 2005, mostly because they keep picking FSU, and FSU keeps failing.

MY THAT IS IRONIC. On Day One of the Big 12 Media Days, the Insight Bowl handed out free swag containing, of all logos, the Big Ten's logo in huge threaded glory on the side of the hat.  Dave, make your bed before you shoot video, you rapscallion you! (At least there's no lotion on the bedside.)

FIRST, WE JUST HAVE TO MAKE THEM CARE ABOUT COLLEGE FOOTBALL. Man, if we could just secure that Mexico City market, or maybe Tokyo--either is as likely as getting the New York metro area to care about college football en masse, but you jump right in there, Jim Delany.