The Big Board is updated by Brian. Sometimes he and Reggie Nelson, being the two most well-endowed men on earth, enjoy conducting orchestras together. One holds his baton and keeps time, and the other hits the gong at the finale of the last movement. It's far more moving than one might think, especially when they do Mahler. The lone and impressive update changes the entire scope of the Fulmer Cup 2010, and is explained at length below. 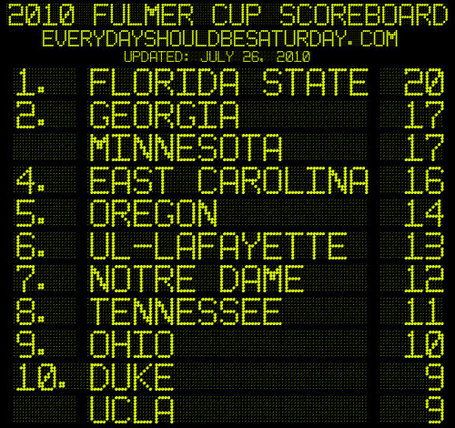 We may have a new leader at the tali end of July in the Fulmer Cup, proving that four quarters of effort get wins, not three, and that you can never, ever count a Florida school out of the running until the whistle sounds.  Ellis T. Jones reign as the King of the Fulmer Cup persists, but not without a respectable challenge by Nigel Carr of Florida State.

Jones tallied ten felonies in total in his epic taser/kidnapping/assault spree, a total that created the honorary Ellis T. Jones Award for outstanding individual accomplishment in the field of Fulmer Cupdom. Few men have come close to even approaching those heights since, with only Jimmy Johns and Trent Pupello coming close to equalling the work put in by Jones in the art of being a one-man crime spree.

We may now add another face to the Mt. Rushmore of student-athlete miscreantism: Florida State's Nigel Carr. Carr began his scoring last week with a citation for marijuana possession on the 22nd. Warming up is important if you want to prevent injury: stretches the ligaments, heats up the tendons, making everything more pliant for the hard work to come. Carr, as we mentioned earlier, is obviously a professional, as demonstrated by his preparation for bigger things.

Having loosened things up, Carr then went completely klepto-apeshit.

According to Tallahassee police, Carr burglarized a sport-utility vehicle parked off Hayden Road, across the street from Doak Campbell Stadium. Police say Carr broke into the vehicle, a white Toyota, and stole a "book bag" that contained the victim's "purse and other items," including a sweater. Carr then allegedly dumped some of the stolen contents into a nearby dumpster. In addition, police say Carr stole the victim's credit card, which an officer located on the floorboard of a white car that Carr was allegedly driving. Further, police say Carr is the suspect in the burglary of another vehicle near the Florida State campus.

That second one involves the theft of a checkbook from a car, and could result in still more charges for the linebacker, something made quite likely since they have video of the incident in question.

All of this is made even stranger than it already is by Carr's generally good reputation among his teammates and coaches: he was named the most dependable linebacker in spring practice and lauded for his good attitude as one of the players flourishing most in Mark Stoops' new defensive scheme. Carr appeared in thirteen games last season. He wasn't a marginal case clinging to a spot on the depth chart, and wasn't a malingering malcontent obviously seconds away from robbing a bank with a banana in his pocket. Carr had potential, and something this random could and likely will put a serious dent in said potential for years to come.

Having addressed the peculiar and sad nature of the crimes, the tally must now be made. Carr received two counts of auto burglary, criminal mischief, credit card theft and fraud. All of these are felony counts, and awarded three points each. Add in the marijuana possession charge from last week and the bonus point for sheer aggression/achievement, and Carr pulls down an astonishing seventeen points in a single run.

This isn't a mere Ellis T. Jones situation, either. In a replay of Alabama's Jimmy Johns-fueled victory in 2008, the Seminoles qualify for the team award thanks to the arrest of Ed Imeokparia in the poorly planned theft of a cellphone earlier this season. Your new leader at twenty points total is Florida State in the late innings of the Fulmer Cup. Your move, license-poor and occasionally drunken Bulldogs of Georgia.

PS. You say, "Aren't you going to gloat about FSU and Georgia, Florida's two biggest rivals, running 1 and 2a in the standings?" Not with a month left in this thing and the players back in weed-laden, booze-addled Gainesville, we're not.