THE ONE-SHOT LAWSUIT WE'VE BEEN WAITING TO FILE IN ORDER TO MOVE TO BORA BORA AND WALK AROUND PANTSLESS ALL DAY. From reader Marc, who spied this at the Gap outlet in San Ysidro, California just north of the Tijuana border stop. 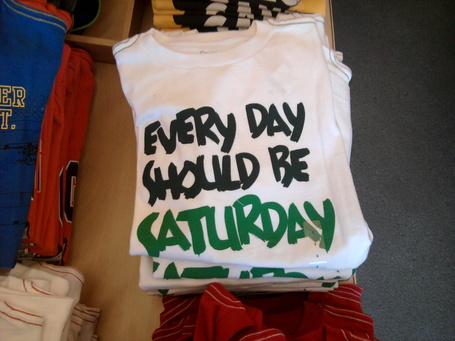 OH IT IS SO ON GAP. First the lawyers, then the protracted litigation, then the unfairly large copyright infringement settlement, and then the decadent phase where we blow the money on drugs, booze, and an elaborate but poorly thought out capital investment in a Belorussian mink farming operation. We can't wait.

WHITHER JEREMIAH MASOLI? Finally, after two weeks of speculation that Jeremiah Masoli was headed to every SEC school at once, and would in fact play all-time quarterback for every team in the league, Masoli has in fact sent his release papers from Oregon to Ole Miss. He could have also emailed his release papers to every other school in Division One, mind you, but it's a sign that the rampant Masoli-to-Oxford rumors aren't totally hallucinatory. Ole Miss could use another quarterback following the departure of redshirt freshman Raymond Cotton, who left Hootie Acres for undisclosed reasons.

(Let's pre-empt the "Houston Nutt kills quarterbacks' potential" rationale by suggesting that he wanted to attend a school where he could date more attractive women than those he could find in Oxford. Cotton is expected to announce his transfer to Big Boi's Vocational Technical Institute and Red Cup Academy on Wednesday. By the way, Houston Nutt kills quarterbacks potential dead. This is a point not to be forgotten.)

NO ONE HAS EVER SAID THIS BEFORE. Even if the Marvin Austin investigation turns up nothing--and thus far, there is nothing to suggest it will turn into the kind of infectious, eligibility-killing bug it appeared to be last week--the timing of saying "We'll be fine" to recruits after Lane Kiffin said the same thing....yeah, it's just an unfortunate coincidence, and further evidence Lane Kiffin ruins everything for everyone.

RE: RUINED THINGS: Pete Carroll acknowledged "a legitimate error in our judgment" in setting boundaries at USC, but still reiterated that USC's violations were not major violations, and not deserving of the hammer dropped on the program in Reggie Bush's wake. Seantrel Henderson would agree if he weren't too busy wearing a groove into his new custom couch in the VIP at [INSERT SINGLE WORD LIKE "AIR" OR "SPICE" INDICATING STUPIDLY NAMED CLUB HERE] on South Beach.

"I get so excited when I talk about B.J, I can't stand it," Holtz told The Ledger after his speech.

Most of us agree,  Skip. It's something to get excited about, though having  just one scholarship quarterback on the roster is a boner-wilting prospect for anyone looking at USF's roster situation, especially if B.J. Daniels continues to run around 15 times a game as he did in 2009.

NICK SABAN COULD SPEND THE YEAR DRINKING COUGH SYRUP IN A BATHROBE ON THE SIDELINES, KEVIN. The year after a national title is never the most important season. This is fact, and Nick Saban could spend the year watching Juwanna Man in the film room for the next six months without fans raising more than the most inconsequential of peeps. He won't, but he could thanks to the credit advanced to a coach who wins a national title. Little known fact? Larry Coker spent the entirety of the 2002 season painting model airplanes at a Pompano Beach hobby shop, and only showed up for games fifteen minutes ahead of kickoff. (But in your heart you knew that already.)

BRONSON NEVER LIES. After the jump, take the life lessons of Charles Bronson into your week. LETHAL FORCE IS THE ONLY OPTION.