THIS IS WHAT YOU WOULD SEE IF YOU COULD EXPLORE OUR DREAMS. 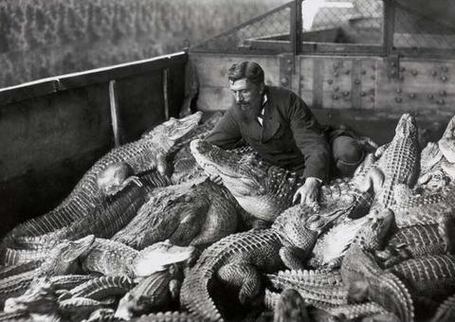 Our nightmares, though, are all too real, but may be headed to some kind of resolution in the case of Maurkice Pouncey. The Pounceys will deny all accusations of taking agent money today, per Joe Schad's Twitter feed, and plan to get bureaucratic about it. Seriousness, this is: the University of Florida Police Department was involved in the investigation, so it must be almost as important as towing students' cars twice in a day. /angryfist

Stewart Mandel's summary mentions an important pattern: the NCAA's investigative department may have gotten smarter over the past decade, but they've been assisted by social media and the stupidity of players who essentially out their contacts with agents on Twitter and Facebook. (As Marvin Austin did when he talked about the bottles comin' one after the other at the Fontainebleu in Miami.) This means espionage-level tactics will have to become agents' best friend in buying off prospects, and you may expect "Sports Agent Black Ops: Tradecraft and Evading the NCAA" will hit the curriculum in the next six months or so.

I saw Leigh Steinberg make a dead drop on the Auburn campus and leave $50K in a hollow rock by Toomer's Corner.

SERIOUSLY WE INSIST YOU'RE NOT AS SPECIAL AS YOU THINK YOU ARE. Parity the SEC ain't, but it never really has been throughout its history, which is the basis of these ping-ponging call and response pieces by Hinton and Braves and Birds. Elkon in particular makes a nice point when he shows that most conferences are about a general dominance by one or two teams, which fits your real life statistical distribution of giants and midgets in a natural situation of inequally distributed resources being contested by rivals of mixed strength. (In other words: the parity seen in the NFL is highly abnormal, and only achieved with a set of rules enforced by a central authority. In terms of quality, college football is far closer to MLB in its arrangement of quality.)

At the end of the year, barring some Black Swan of SEC-ness, it will be the biggest programs in the SEC at the top: Florida, Alabama, Georgia, and LSU. Everyone else is hoping for a few lucky spins of the roulette wheel, a situation replicated in the post-2000 Pac-10, Big 12, and Big Ten. (Everyone in the ACC is going 7-5 or 5-7, and if you can figure out why this is then NOBEL PRIZE FOR YOU GENIUSMAN. Say "league superiority" and you will be farted on until you leave the building our 400 pound bodyguard Mr. Gigglesworth.)

DO YOU WANT A FOUR PART INTERVIEW WITH PAUL JOHNSON? Of course you do, since you need to be told in four installments how little of a gilded crap the Georgia Tech coach gives about you and your useless little self.

TEXAS WATER IS MORE WATERY THAN YOURS YEEEHAW. Tower-shaped bottle? Clipper Cooper will have someone buy one for him, just as soon as he gets through telling youhow the people of South Africa elected a felon as their president.

THAT IS THE WAY TO RETIRE: A proper kiss-my-ass delivered by the Miami Herald's now ex-Florida International blogger. How do you know he hates his employer? See the URL. THAT'S NOT EVEN CLOSE TO SEO FRIENDLY SIR.