He'll save children, but not the British Children.

Holly: In celebration of the fine fellows across the pond what we overthrew back when Thomas Jefferson was alive and filly-slappin', friend-of-the-program The Gurgling Cod directs us to a delightful concoction served at the Manhattan Lounge in Athens. It contains Cheerwine, bitters, and Old Overholt Rye, and goes by the name of "Red Blazer," which on the Friday before a holiday weekend is well close enough to Redcoat for our purposes. Offer one to a friend, then punch him in the mouth while the glass is in it. Tell him he's lucky you're not on a boat, or he would've gotten Two If By Sea. Tell him the Swamp Fox sent you. [hic]

Orson: Here's looking at you, hallowed crapstandard bearer of the American name: 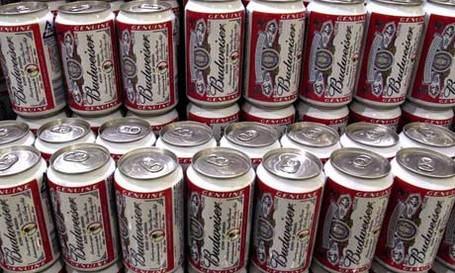 AND EVERY BEER SNOB ON THE PLANET JUST DIED.

Oh, it's not that bad, especially in a bottle, and if it's cold you'll drink it if there's nothing there. For extra verisimilitude, though, it's got to come out of a can to get that slightly toxic aluminum edge to the taste that no amount of plastic lining can prevent. Our grandfather had one of these attached to his hand at all times, and had been in that situation since 1957 when a can of America's brew simply fused to the skin of his hand. He poured fresh ones into the old can and consumed thusly. It's not good, but it's ours, America, meaning anyone who speaks ill of it can JUST GET THE HAIL OUT, OSAMA BIN MICROBREW.

(And if there's no one else around, we'll just take the Sweetwater you've got in the fridge, man. This shit still tastes vaguely of baking soda and poverty.)

Holly: Not to beat a delicious red (thought not dead) horse, but on account of this being a Very American Issue of Spicy Livin', DID YOU KNOW ... that Cheerwine has a Facebook group? Because if you didn't, you may well remain unaware of the existence, for July only and in the Carolinas exclusively, of the Cheerwine-filled Krispy Kreme donut. 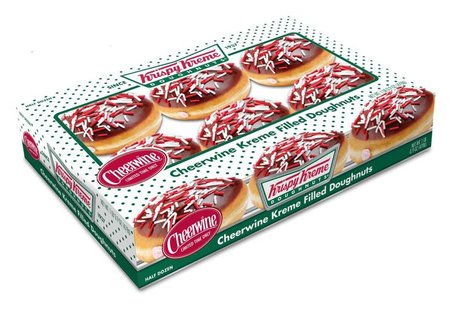 Everyone gather your things. We'll be meeting at the fire exits to descend en masse into Spartanburg at six sharp.

Orson: We're talking America, right? If Holly's opting for one end of the diabetes/heart disease spectrum, then we have to cover the other end to complement the sugar-nuke of the Cheerwine-flavored donut and bring the meaty goodness covered in its natural complement: more meat.

Pig, meet mollusk, and be happy forever together: 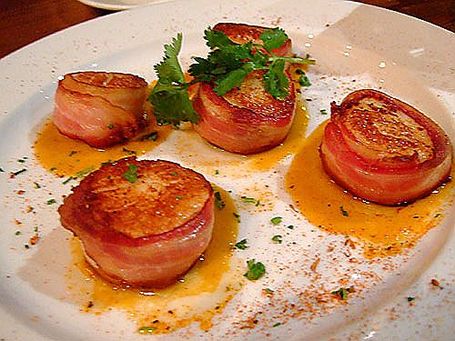 That you can purchase scallops wrapped in bacon in bags at most major supermarkets makes the Jedi ghosts of our Founding Fathers nod in tribute from lofty VIPS as they tip up bottles of champagne with ghostly French maidens. Okay, it makes Ben Franklin do this, and the "maidens" are actually women in their mid-forties missing some teeth, but we're positive the others think it's awesome, too. We're going to eat eight pounds of these by ourselves this weekend.

On the way down you now one of those guys is still dancing and thinking "TOTALLY WORTH IIIIIIIIIIIT [CRASH]".

Holly: Via Ness, the timely and topical lesson "Why You Don't Pour Gasoline On Your Bonfire!"

or, Why You Turn On the Camera With A Quickness When Some Dumbfuck Does.

Holly: Fifty-eight years, two months and 17 days ago, the first B-52 lifted off for its inaugural test flight. Its pilot, Alvin "Tex" Johnston -- who, three years later, would barrel-roll the Boeing 707 prototype in front of a crowd of potential customers -- wore cowboy boots as he guided the plane into the sky. If that ain't American as a motherfucker, I don't know what is.

A half-century later, it's still droppin' science, and the USAF's plans involve keeping it in service until 2040. If ever a plane deserved to have TruckNutz attached to it, it's this one. 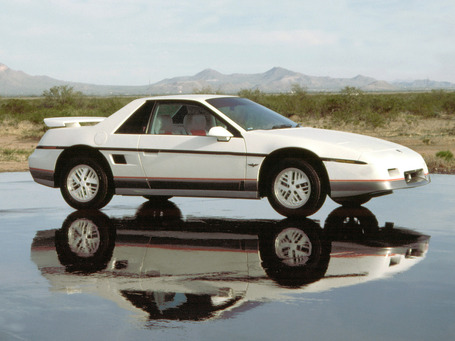 Some cars play coy with you. Maybe they're designed for an asshole, maybe they're not, or maybe they sit somewhere in between like a horrible lab-spawned lifeform begging you to kill it. Pontiac came to specialize in the third variety, making cars like the Aztek, a half minivan, half-SUV piece of shit so misbegotten they dared not insult a dead civilization for fear of it coming back from the afterlife and ripping the hearts out of engineers.

The Fiero was supposed to be something, sure. Small Italian coupe knockoff? A pocket Trans-Am? A Chrysler LeBaron that lost some weight, got a gym membership, and then some shitty plastic surgery on the cheap in a Miami back alley? Whatever its intended pitch, by the time we came along the Fiero had found a role: the smoking heap of American plastic most often driven by assholes in high school.

Marilyn Manson drove one as a high schooler in Lakeland, Florida. If you need any further evidence of the Fiero's greatness in its role as the douchebag-chariot of choice, we cannot and do not have to provide it, since you are being unreasonable. Fun other fact: due to American carmaking's decision to suck at everything for thirty years, the Fiero could, like many GM cars, be unlocked with a key from certain other GM cars of the same era. This came in handy when you wanted to move someone's car a single space over every day just to see when they'd pay attention and notice it. (Answer: three spaces.)

It's a horrible little car, but some affection for its unique ability to corral dickheads remains. FUCK YEAH FIERO, indeed: in its day, it was the Ed Hardy T-shirt of automobiles.

CANON.
Orson: Prohibition: Thirteen Years that Changed America.  Recommended for so many reasons: the vivid descriptions of Carrie Nation, a six foot woman who really could wield an axe like a steak knife; the astonishing work on quantifying just how much Americans drank in the 19th century (you'll be horrified, even as a functional alcoholic); and the description of shady characters like Dr. Diocletian Lewis, quack theorist, prohibition leader, complete fucking racist, and in the end a total fraud. It's America in one easy picture: an eternal battle between racist, sanctimonious charlatans versus filthy, stinking, ungovernable drunken rabble.  It's glorious.

Holly:  No one should ever, ever forget how many light-years ahead of everything The Muppet Show was. This isn't a particularly sterling example, but it is AMERICA!


Happy holiday to y'all and y'all's, and may each and every one of you survive your sunstroke, sugar shock and alcohol poisoning to meet us back here Monday. God bless.