3. OUTBREAK'D. The Maurkice Pouncey case is being teased out of a long string of improper agent/ player contacts, not all of which are connected. The UNC and South Carolina cases are certainly connected because of the friendship between South Carolina's Weslye Saunders and UNC's Marvin Austin. The Pouncey case, however, is an independent thread in the narrative here, a self-reported violation offered up by Florida.

You will see others over the coming weeks out of a combined instinct for phophylaxis on schools' parts and the increasingly aggressive spread of diagnosed cases. Anyone at UNC who so much as took a text from an agent best eat their cellphone and throw their laptop out a window. (If you need instructions on this, please consult Cam Newton.) Guys who might really want to do this without exaggeration: wide receiver Greg Little, safety Deunta Williams, cornerback Kendric Burney and linebackers Bruce Carter and Quan Sturdivant.

(Sturdivant is already on Butch Davis' shit list for his weed-inspired trip to Bojangles last week. This won't help.)

At the least, Marvin Austin will be quarantined, and has likely played his last NCAA football game.

2. SHYMALAN'D. What will likely happen to any games played after the suspected contact with agents. 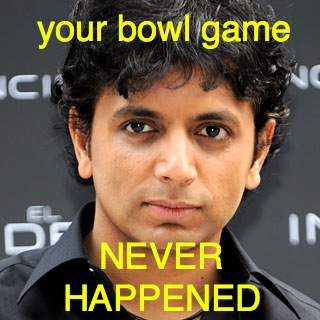 If the Pouncey case is true and holds, then the Sugar Bowl against Cincinnati never happened, which is just as well since only one team showed up anyway. Let's hope this is the only major BCS game affected from last year. If this newfound dedication to agent-smacking finds its way to Alabama, for instance, then there is the distinct possibility that an ineligible player played in the national title game, and then we're back to Reggie Bush-ing titles and all that other delightful historico-nonsense that happens when you do this.

THIS IS JUST A WORST CASE EXAMPLE SETTLE DOWN. We're saying we don't want that to happen, because doing that shit is annoying and you get Auburn doing things like asking for another fake national title trophy. No one wants that, not even Demon Killing Gene Chizik.

1. CHINATOWN'D. Alternately known as "The Tour de France" syndrome. Consider the strange case of UNC, a school with middling records and outstanding talent, and the degree of agent contact they may have had there. The NCAA, so freakishly proactive now after years of navel-gazing, is following leads there, meaning it can inevitably follow this at bigger and more talent-heavy schools like, oh, just picking this one at random, Florida.

This could also mean a huge and almost ungovernable number of agent-player contacts. They can't all be prosecuted, so the most egregious ones will be hammered since the NCAA found that hammer after a decade, knocked the rust off, and started swinging it a few months ago. UNC appears to be the early leader for this, though Florida could take a brutal knock or two for a player receiving $100K in cash in his last days as an amateur.

Some teams will get away with this because this is Chinatown, Jake, and there's not enough bullets in the world to knock down the bastards walking this earth.