THE KEY TO AN AWESOME HIGHLIGHT VIDEO IS TIGHT RETRO-PORNO DANCE MUSIC. Sorryche makes the finest Gator highlight reels around, and not just because he uses occasional ALL CAPS taunts in the middle and phrases like "TRON-ASS GRAPHICS" in reference to expertly captured vintage video. No, the real key to any highlight video's greatness is the soundtrack, which in this case matches this year's Lightspeed Cerebrus of running backs with some new retro-porno dance music.

Sure, with Steve Addazio calling the plays it might be like watching a first-time gamer cycle clumsily through all the neat guns you earned in Red Dead Redemption, but as long as he can just pick one and start firing he'll kill a least a few banditos before getting overrun. (Please, please let the rumors of last year being a transitional offense be true.)

WELL SURE PEPPER SPRAY DOES TEND TO MAKE YOU RANDOMLY ANGRY. WR Da'Rick Rogers explanation for swinging on someone in the Great Rocky Top Block Knocking-Off of 2010: he was pepper-sprayed, couldn't see, and just started swinging blindly. Our personal experience with pepper spray would verify that vision is affected, though we cannot speak on the wisdom of just swinging blindly in a barfight under any circumstances. You could pull back for a punch and hit your buddy! Then you'd shake your head, a funny sound effect would play, and you and your pal would pat each other on the shoulders before rejoining the fray, because life works just like an Western and all stunning curvy redheads run bordellos, drink scotch, and pine for distant, lonely, and emotionally unavailable cowboys.*

Robert Capoullez, the off-duty cop knocked out in the brawl and then donated to the city as a potential speed bump by the civic-minded Tennessee layers afterwards, has been released from the hospital as of Monday, but has not returned to work. Meanwhile, the situation at Tennessee has repulsed ClayTravis to the point of relying on the last resort of English majors everywhere: Southern Gothic literature. (While we detest single sentence columns, this is one of Clay's better efforts in a while. For best results copy and paste and re-edit into paragraphs.)

DAMN YOUR PETTY ASSES WHO WILL PAINT "THE INEVITABLE STREAK-ENDING LOSS" WE PRAY FOR? Twenty six schools have joined the University of Alabama in the Tide's suit against artist Daniel Moore, the man who has painted the art thousands of Alabama fans have pleasured themselves to for over three decades now. Alabama is seeking back royalties on Moore's paintings, which Moore claims are protected under the Constitution as free speech.

The list of schools in the amicus brief does contain some light comedy, especially if you imagine them claiming similar rights to future depictions of greatness. (Minnesota's on the list, meaning Tim Brewster is envisioning claiming the rights to the Claymation version of their 2013 International Bowl win. DARE TO DREAM.) The university does have a point, though: without the Alabama brand Daniel Moore's work is likely robbed of much of its value since no one's just going to buy a picture of someone blocking a field goal without labels and brands attached to it. (Except for Frank Beamer, who will put it over his bed for inspiration and titillation.)

But just to piss Alabama off and get our names on the lawsuit, here's our depiction of the SEC Title game, an exclusive MS PAINT PRODUCTION and special sale item only on sale for $499.99 in the EDSBS shop starting now ORDERS ARE FLYING OUT THE DOOR YOU MUST CALL NOW. 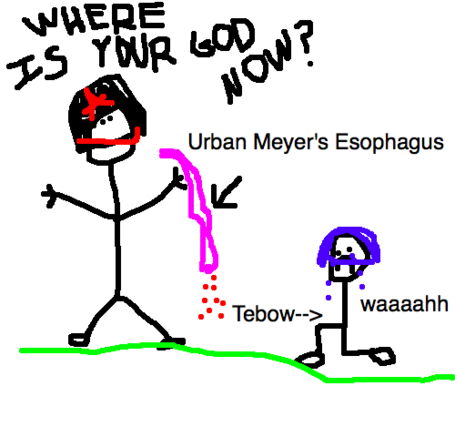 Call now and we'll throw in a free Gary Pinkel Criterion Collection of Middle American Erotica AT NO EXTRA COST.

SPEAKING OF PEOPLE ALABAMA FANS WILL CLAIM THEY DROVE TO RETIREMENT/MADNESS/SUICIDE/RESIGNATION: Anchor of Gold says restoring profanities is job one for Robbie Caldwell, and we couldn't agree more. Nothing great has been accomplished in history without them, as Gandhi's infamous "This is salt, you fucking dickbats" speech and Lincoln's moving "I'll knock your balls off with a goddamn tamping iron, George McClellan" letter illustrate.

HAVE SOME BALLS, MAN. Robbie Andreu's willing to call an FSU upset over Oklahoma at home, but not go with the outright Florida over Alabama call? Put your chips on the table or walk over to Slots O' Fun for penny slots, sir. This is the Bellagio, and luxury has its price.

WHEN WILL THIS GET OLD OH NEVER. Notre Dame is stocking up on the interior line and on defense on the recruiting trail, an arousing bit of news for any football fan re: their team, but this...yeah, this never, ever gets old.

"Coach Kelly and the entire Notre Dame staff has been very aggressive in recruiting," said Mike Frank, the publisher of IrishSportsDaily.com. "They are getting the offers quickly out the door. They are organized and they grind it and work very hard. This staff is much more aggressive than the previous one."

This certainly beats the Charley Weis recruiting strategy of phone call/ wait for awe/ flash Super Bowl ring/ wait for yes/ fart noise. Also included in that article is the important news that Syracuse has stunned the world by signing a long snapper.  #sadSyracuseFootballtrombone

A RIVALS RIVAL APPEARS. No, really. Recruiting wasn't creepy enough, and we need another one. Additional needs for the internet: more videos of Asian women being abused by well-hung men, political websites, spam comments finally satisfying my need for Ed Hardy gear, and pictures of cats in intriguing positions with witty captions. (<----could actually use more of these) (infinite tolerance for LOLcats now in tenth year running.)

IT'S A SIGN THE GAMECOCKS ARE GONNA WIN THIS YEAR. He was just surfin', brah. Let him be.

*Or should, at least. WE'RE SORRY WE THOUGHT THIS WAS AMERICA.