FLORIDA SCHEDULES A MYSTERY GAME AGAINST THE PAC-10!

Share All sharing options for: FLORIDA SCHEDULES A MYSTERY GAME AGAINST THE PAC-10! 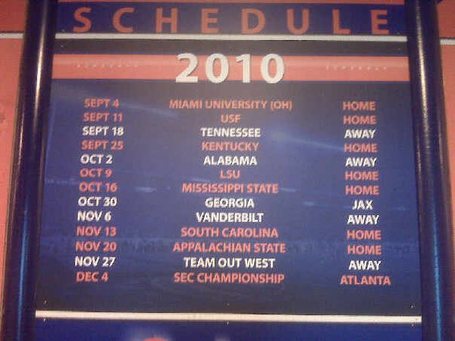 In lieu of the November 27 matchup with traditional rival Florida State, we appear to have a mystery game scheduled against some "TEAM OUT WEST." Wow, that's exciting! (HT: Timler.) Who knows who it could be? The All-Blacks? The Yomiuri Giants? THE NATION OF RUSSIA ITSELF? Way to go, Jeremy Foley. Our out-of-conference scheduling slowly approaches respectability, especially now that we've dumped FSU (who were really denting our SOS as of late.) Next challenge: getting New Zealand's National Rugby team ranked.

In other conference news, the list of SEC Media Days' players available for interview is out, and none of them will be as cool as Dickie Lyons.

There's a few surprises, but one surprise that's not really a surprise: Steve Spurrier did not invite his senior quarterback Stephen Garcia. If you need us, we'll be elbowing people out of the way to get to Kentrell Lockett, who may capture the Dickie Lyons Award for excellence in soundbiting.