DELICIOUS: RECEIVERS IN THREE POINT STANCES. Running a two minute drill from under center, receivers in three point stances, Pepper Rodgers coaching in a flipped-up fedora...there's much in the retro to love in this clip of the final sequence from the 1978 Georgia Tech/ Georgia game (except the final result for Tech fans, mind you.)

What happened to that fantastic scoreboard, 'Dawgs? 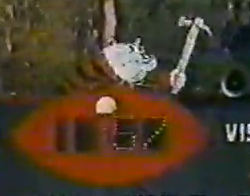 Either that dawg is so determined to hammer your ass he's going after you with the claw end, or he's so stupid he's about to hit himself in the face with the blunt end. It works for visitors and home crowds, really, since you can assume either with likely probability. Oh, and nice sweater, American Apparel dawg. There's skinny jeans behind that scoreboard and you know it.

The other revelation: Pepper Rodgers was a fine football coach and GM, and was also shafted by the Oscars for his performances in Dr. Strangelove and Being There. 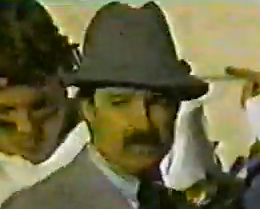 CHARGES PENDING: The probe into the Tennessee bar brawl will last a bit longer with further charges to come. If you're a fan of talk radio speculation (remember: it's a message board, but with a microphone and ads for pet training services!) then ponder Tony Basilio's claim that the puncher was linebacker Marlon Walls, who is cooperating with the investigation and is very lawyered up at this point. The knotty barfight that started it all is not the problem, since barfights tend to only have drunken witnesses and very little clarity about who did who. Punching an off-duty cop and then inviting him to a boot party in the street, though, is what will end up getting the Vols several notches up in the Fulmer Cup rankings.

BECAUSE HEAT ISN'T WEATHER. We're all hicks, just some of us admit it. The Big Ten may have their championship game outdoors at Soldier Field, though the leaders for a hypothetical Big Ten title game's inaugural edition in 2012 are Lucas Oil Stadium in Indianapolis and Ford Field in Detroit. FUN IS GOING TO DETROIT IN DECEMBER.

Anyway, the game could be held outside, something we salute as a fan of sports that take place beneath only the ceiling offered by the world itself. We'd worry more about the weather in the SEC, but we banned weather in 1992 and have had none since.

"This is not SEC football," he told the paper. "This is Big Ten football. The weather is part of the game."

We understand the point: the SEC Championship Game is held indoors, just like the rest of SEC football, which is uniformly played under hermetically sealed domes across the Southeast. Our protection from the elements is so complete, in fact, that the most common injury suffered in the SEC is rickets due to lack of sunlight and light sensitivity for our players who, practicing under only artificial light, often burst into flame beneath the harsh light of bowl games played under real sunshine.

CAL SPENDING TOO MUCH DOUGH ON LAVISH TRIPS TO THE FRENCH LAUNDRY. Cal is concerned about cost overruns in the athletic department, but Jeff Tedford needed a RAM expansion and new hard drive, and Cray Computers doesn't just hand those out for free. (HT: Fesser.)

HAPPY NCAA 2011 DAY. We're anticipating attempting some kind of epic celebration of this, like seeing how long it would take to play a game with each team utilized between two people over 24 hours or so. Taking submissions for endurance events in comments.