With such a busy week in the Fulmer Cup, it's just so tense around here. If only there was something to take the edge off around here, just....

...ahhhh, that's so much better. We're a bit hungry all of a sudden, though. UNC linebacker Quan Sturdivant  understands our pain, though. Sturdivant was arrested on Saturday for marijuana possession, and likely fell into a bold new plan to nab weed smokers in the act concocted by the Albemarle police department: waiting at places that are irresistible to high people, and then searching them based on reasonable suspicion. (You're at Bojangles/Taco Bell/Checkers= you're probably baked to the gills.)

It's just not fair, but please note both the time and the location:

Sturdivant had less than half an ounce in his possession when he was pulled over at Bojangles’ at 11:15 a.m., reports state.

Wake and bake interruptus, Albemarle PD? We're sorry, we thought this was America, where you can wake up, get high, and then make a leisurely cruise to the fried chicken depot of your choice without harassment. You know how Rick James died? Voluntarily, and all because of bastards like you. In other news, if UNC's defense is getting high and eating junk food en masse to start their days, get the hell out of their way, because if the 2006 Florida defense is any indication, the ACC is about to get ripped in half by a weed-smoking cyborg Kodiak Bear named Destiny Killballs.

The rest of the Cup and the Big Board follow after the jump. POP THE HOOD TO LOOK AT ITS SEXY CAKES, Y'ALL, and at Brian's standard massively hung work in the key of Reggie Nelson. 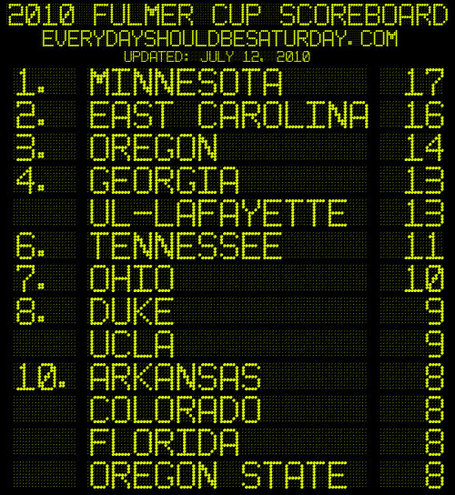 TENNESSEE'S NEW MASCOT IS STOMPY THE UNSPORTING ELEPHANT. Unknotting the mess of Tennessee football players may still require some points maintenance, but here's what we have from the bar brawl at Bar Knoxville, located next to Laundromat Knoxville and the equally unique Parking Lot Knoxville.

Da'Rick Rogers: Disorderly conduct, resisting arrest. Both misdemeanors at one point each.

The grand total for the Tennessee incident is eight points, with modifications open if further charges are filed in the case (and one more player is expected to be charged, per Clay Travis's on-air interview with a KPD official today.)

GEORGIA: Dontavius Jackson and Tavarres King earn points for Georgia with the ill-advised decision first to get in a car in Athens, a move that has never yielded positive results for UGA players ever. Consider walking, riding a bicycle, or even adopting one of thousands of burros who need homes for a green option that simultaneously trims your lawn and fertilizes it. #burroskeepbulldogsoutoftrouble #youcanputrimsonthemifyouwant #itmakesthemfeelpretty

Secondly, they made the mistake of getting into the car drunk, underage, and without the years of practice that has kept experienced tipsy land sailors out of the pokey for years.* Dontavius Jackson gets three points for the DUI charge, since he was also underage, and King gets a point for underage possession. Burros could have prevented four points for Georgia in the Fulmer Cup, but you didn't listen to us, did you?

SOUTHERN MISS: Picks up a chintzy three points thanks to three players getting disorderly conduct charges when Hattiesburg police, seeing people standing around, told them not to stand around, and then arrested three Southern Miss players for standing around, because policemen dislike overly chill bros who just like, you know, standing around. Standout wide receiver Deandre Brown was one of them, but his status for the opener against South Carolina should not be affected (because this is a really, really stupid charge.)

OHIO UNIVERSITY: Two points for an assault charge in a barfight for Ohio's Matt Britain, because one point for what is likely a misdemeanor assault charge, and one point for repeat offender status. Athens, Ohio is built over a hellmouth, and one must never forget this.