Quite a few arrests, you say? If you're referring to this weekend, that is quite, quite true. Updates for the Tennessee and Georgia cases will appear in the Fulmer Cupdate later today, and are not included in the Index.

I LOST MY MICROPHONE ON THAT ONE. Jack Fleming is one of college football's great underrated radio voices ever, but watch this clip for his work and for the sight of the Mountaineer running through the wake of an active play to fire his musket on the field, something that would probably get him a fifteen yard penalty and stiff finger-wagging lecture from a hectoring columnist today.

When someone asks you "Why did the shotgun become so popular in college football?", watch the jailbreak blitz on that first play, the pell-mell blocking by BC's line, and then note why the shotgun became so popular (i.e. it gives you half a breath longer with even shitty blocking up front to get the ball off on a pass play, thus generating Steve Spurrier's comment pre-1996 that the shotgun was for teams "that weren't very good on offense." You'll notice South Carolina goes from it quite a bit now. Just sayin'.)

THREE HOURS TO GAMEDAY WOOOOO. The new hour of Gameday will appear early on ESPNU, and will feature heaven knows what in terms of content, something we'll make some uneducated guesses at later today. It will feature more Erin Andrews than it has in the past, however meaning Gameday is clearly seeking to take over the internet by rough force in terms of pure Google search power. The other note Hiestand makes of interest there: Rece Davis will be taking over the Fowler spot on Thursday night games, while Fowler will do more studio work in Davis' stead. That the two are nearly interchangeable is a compliment to both, since there's literally no dropoff in quality in the rearranged lineup, and Davis will fit in nicely in the Bromancing The Stone booth with Jesse Palmer and (possibly) Craig James.

RAMMER JAMMER XBOX HAMMER. The highest ranked team in NCAA 2011 will be Alabama, and you know what this means: 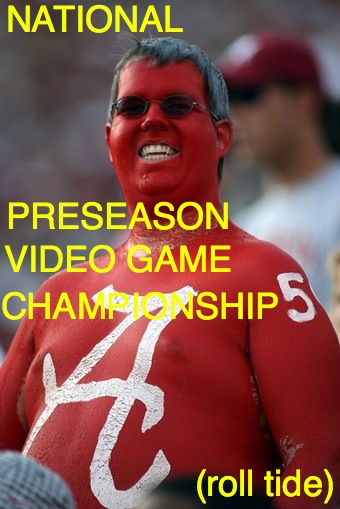 We congratulate the Crimson Tide on their 83rd National Title. The Washington Post drearily reminds you that athletes still get a hot bowl of jack shit nothing for the use of their images and likenesses in the game, which really should be corrected by players getting some form of royalty, or else video game makers switching to all-mascot games in lieu of actual people. This would be fine if you are a Florida Gator, btw, because the sight of short-legged Albert getting separation on a go route is still one of video gaming's funnier sights.

IMPENDING OOTBALL MEANS NO MORE CRYPTOFOOTBALL STORIES. Like making the tenuous three-step connection between Mike Leach's very valid lawsuit against Texas Tech (ahoy, harbinger of doom Craig James!) and the ongoing lawsuit between Chaz Ramsey and former Auburn trainer Arnold Gamber, who Ramsay alleges mishandled his recovery from a back injury during his time at Auburn, and thus ended his career. Gamber is now the new trainer at Texas Tech, and probably does nothing different than any other trainer in America when it comes to injuries. (He hides them or implicitly asks players to hide them.)

LOOK THE HELL OUT, MCNEESE STATE. HELL'S COMING WITH THEM. The collection of Glass Joes lined up for the blatant cash grabs of the twelfth game for the SEC are fairly spectacular, and for once Florida is not lining up the most lopsided chicken versus horde of tigers matchup of all. That honor goes to Alabama, who out Jeremy Foley'd Jeremy Foley in scheduling Georgia State in their first year of football competition. We'll set the fictional line on that game at ninety-four points, which you may cite as "OMG can you believe the spread on that game?" even though Vegas won't touch it with your mother's washing pole.

(Chattanooga at Auburn is fairly choice, too, especially coming off a game last year against Oklahoma where they were down 50-0 at halftime. Gustav and the Springdale Flesh Removal Offense might put that up on them and then not courteously take a half of knees like the Sooners did, though duplicating the apathy of not even sending out the Sooner Schooner for the last score will be hard to equal.)

JERRY JONES AIN'T GOT SHIT ON ME. T. Boone's gettin' antsy, and if that's the case,and there's an opening in the Big 12 South, AHOY KEY WEST HEAD COACH MIKE LEACH.