Damon Evans, UGA Athletic Director, was arrested for DUI last night in Atlanta at Chastain and Roswell Road. This is his mugshot. You might want to print it out and frame it for posterity, since it may be Evans' last photo taken in his capacity as Athletic Director at the University of Georgia, and because there may never be a more DUI'd up DUI mugshot than this one. (Roswell Road is one long sobriety checkpoint. Evans clearly doesn't know about the back roads.) 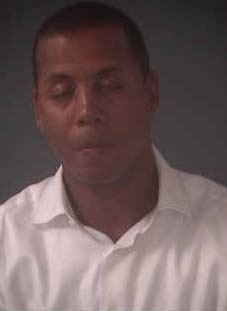 Evans is a pro though, and refused a breathalyzer test because you're gonna have to catch me drinking from the bottle like Nic Cage in Leaving Las Vegas before we let you do us like that. Good god, he looks like an undiscovered species of bear that lives solely off fermented fruit somewhere in the foothills of the Himalaya. Behold the Tipsy Spotted Fruit Bear, weaving through the forest with its distinctive zig-zag gait.

This will count for the Fulmer Cup, though the exact points total remains to be seen. But shit, if you want to hit the Career Implosion Button with a quickness, having to spend a night in the Atlanta City Jail--which he did--is a sure way to do it. Evans is "headed back to Athens" to "get fired."