THE CHAMPIONS OF THE SCRAPPLE CONFERENCE AND THE MOUNTAIN WEST (NOW WITH KANSAS) GO TO THE ESTEEMED TOKYO BOWL:  The Mirage Bowl, which we kind of proposed in our mock-up of Asian bowl games, has already happened. The game lasted from 1977-93, and often featured two teams from the same conference in the spot where we now have conference championship games in early December.

We can only assume giant robots and a pleasure servant in every room was standard, or at least standard until conference realignment and the advent of conference championship games killed it along with the Japanese recession of the early 90s. Houston Cougars, why you don't use the eye-flash animation anymore, we'll never know. 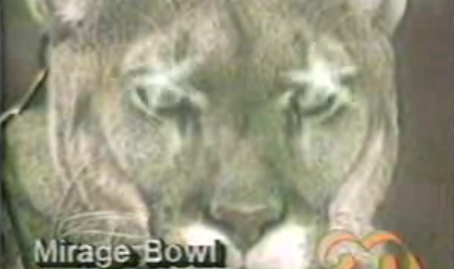 FRIDAY SHOULD BE FUN. Big 12 ADs, even when quoted anonymously, just became far more willing to leak rumors than they might have been before since any incentive to form a united Big 12 front went to pitiful shreds the instant expansion proposals surfaced. One is quoted here saying Nebraska could announce a move to the Big Tenby Friday. Perhaps you planned on mowing the lawn this weekend. You should cancel these plans, pulling the wreckage of the Big 12 out of your front yard will take precedent along with keeping Lew Perkins company. (He's sleeping on your couch for a few weeks until things cool out at home, dude.)

BAYLOR JUST WANTS YOU TO KNOW HOW MUCH IT LOVES YOU. Scipio Tex has Baylor's intimate text messages, and they are precisely what you imagine they would be. Baptists: one hook-up, and suddenly they're crawling through your airvents with flowers and a crowbar moaning about eternal love.

VARIOUS HEADLINES OF SIGNIFICANCE ABOUT MICHIGAN. While the stadium will be completely smoke-free this season (DAMNED LIBERALS), the secondary may remain on fire for quite some time now that Demar Dorsey, VHT safety and one of the crown jewels of Rich Rodriguez's last recruiting class, is likely going to be turned down by Michigan admissions. MGoBlog has the interview with Dorsey here, who may have to reopen his recruiting back up to the schools who were interested in him without academic reservations: Tennessee, Florida State, and USC. (He's a Fort Lauderdale dude, so a return closer to home makes the most sense.)

Michigan also had the nasty news that John Bills, redshirt junior tight end, was involved in a serious car wreck along with two other (uninjured) Wolverines, and suffered significant injuries in said accident. Good thoughts and wishes all around.

YOUR REGIONALIST QUOTE OF THE DAY:  From Reason.com:

If your students can harvest oysters without leaving the state, you are not a Big Ten school.

Unless we're referring to Rocky Mountain Oysters, then yes: that seems like a fair rule.

SOMEHOW SO APPROPRIATE: The dorms in Bernie Madoff's prison are named after ACC schools. Florida State features the most escapes due to their lack of defense, the Georgia Tech is the old school triple-option dorm without air-conditioning, heat, or electricity, and the Miami dorm features the most sodomy because, well, it's the Miami dorm.

HE'S NOT OLD AND WILL TAKE HIS SHIRT OFF TO PROVE IT. Steve Spurrier is not old, he's just "Ol'," and will challenge you to a push-up contest just to prove it. This article only strengthens our suspicion that Spurrier calls up old beat reporters just to tell them how in shape he is.