THE MAC ON CONFERENCE EXPANSION: "NO THANKS, WE'RE COOL."

Share All sharing options for: THE MAC ON CONFERENCE EXPANSION: "NO THANKS, WE'RE COOL." 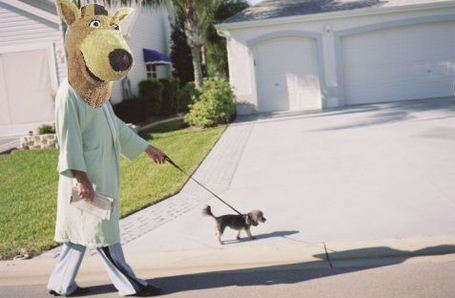 In the midst of conference expansion, the MAC would like everyone to know they are just fine where they are.

"We're pretty happy where we are. Got cable. Got AC. Got my own door and a conference game. Three squares a day and a little tv scratch. It's cool. It's a way better arrangement than you think."

The MAC addressed reporters wearing an open terrycloth bathrobe, a pair of Akron Zips boxers, and a white t-shirt from a lawn chair in his parents' garage early Wednesday afternoon.

"I'm not gonna be out there making myself miserable trying to keep up with the Joneses. LIfe's short. I could be out there working, trying to find other teams and caring, but that's slavery and you don't see any chains on me. Only thing I gotta do is clean up after Towtruck over there, and even then Mom never checks the bushes."

Towtruck, the MAC's pet bull mastiff mix, slept soundly on a tattered couch in the corner.

"That's where I throw his crap. I don't wanna be vague, but i'm not usually up this early."

When asked if anyone had approached the conference about expansion or merger, the MAC responded "Nah, and lemme just tell everyone that we are cool here. Really. I mean, I appreciate the interest, but I couldn't be happier right now," he said as he picked the crumbs from the bottom of a KFC box sitting on the coffee table.

While not engaged in the frenzy over conference expansion, the MAC does keep busy by watching television, rearranging its furniture, and occasionally detailing cars for money. In rambling remarks Tuesday, he stated his pleasure with living in a garage in an ever gentrifying neighborhood.

"These people. I don't get it. They just keep building bigger houses and stuff. Like, my stuff's all right here: the Xbox, the couch, the dog, the flat-screen. I can put posters up wherever, and there's lots of natural light when the door's up. Why you need, like, room for six more teams I don't know."

He paused and watched as the sprinklers turned on in the yard.

The interview was cut short by his mother's request to walk her dog, Daisy, and to please remember to ask Randy about that job at Chipotle he'd told her about a few days ago.