This week's USC Death Penalty Watch is sponsored by Sleigh Bells, who remind you that indie kids will love any duo with a hip bro and a high-pitched girl singer in American Apparel gear.

This week, the USC Death Penalty Watch comes to you from the wormhole the NCAA's investigation fell into shortly after their hearings. Like Schrodinger's Cat, we can no longer assure you it exists, since it sits in a black box and is either alive or dead, but may be both simultaneously alive and dead depending on what universe you observe it in and what your perspective is.

Thus the parallel universe blue tinge to the meter this week. If science fiction has taught us anything, it's that you can enter an alternate dimension with the careful use of a few lens filters and color effects. 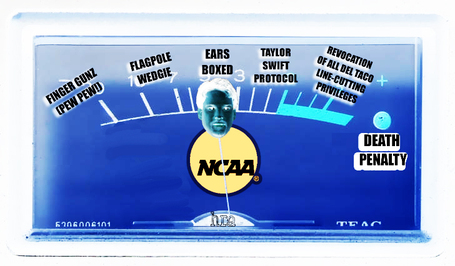 John Wilner, writing last week after the second postponement/false anticipation of the report, mentions a point not to be ignored: most of the "OMG HERE IT COMES" reports have come from national sources, not the LA Times or others with deep ties to the department.  So as the saga sits in suspended animation for the moment, evaluate your rumors from the inside moving out, not from mad national spitballing.

Our best guess this week sits at "Ears boxed," a guess made based on the alleged length of the report (they're going to do something, so Finga Gunz are out) and on the severity of the charges made against USC. CASH MONEY WAGER: a year bowl ban, ten scholarships, and probation of some length, a punishment in accordance with the NCAA's rule of pissing off everyone a little in making a ruling. Vacating wins will likely be in there, but you might as well do something as meaningless as putting an asterisk by all their games since vacating wins does nothing and punishes only imaginary people in the past. TAKE THAT, PAST!