EXPANSION CATECHISM: THE PAC-1O EXPANSION Q AND A

Share All sharing options for: EXPANSION CATECHISM: THE PAC-1O EXPANSION Q AND A

WHAT THE HELL HAPPENED OVER THE WEEKEND? College football as you know it may have ended and started its transformation into something new altogether, a collection of behemoth conferences with their own networks standing like great tropical hardwoods blocking out the sunlight for the rest of college football's smaller flora.

IS THIS REALLY JUST A BIG GAME OF RISK? Sort of, yes. Texas is Australia. (Via commenter Bambakophobia:) 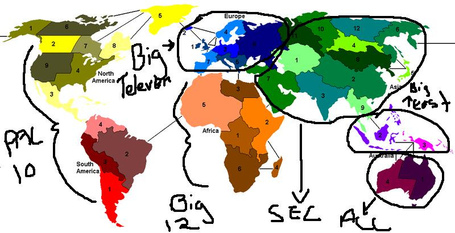 GOT ANY NON-BOTANICAL/NON-BOARD GAME METAPHORS FOR THAT, PLANT NERD? Yes: Chip Brown was totally on point, and the Pac-10 is going to attempt expansion at the cost of the Big 12 in spectacular fashion, and this is the complete realignment of the world post-Soviet Bloc Collapse.

THANK YOU. A MOMENT OF REVIEW, PLEASE? We'll assume you are already familiar with the other relevant piece of this puzzle, the Big Ten's plan to expand, add a championship game, and possibly skim a team or two off the Big 12 North (Nebraska, Missouri) or the Big East (Rutgers.) Alive in this scenario are less likely but equally possible things like Texas joining the Big Ten, Jim Delany hosting a nude pilates program on the BTN, and the conference adding the Montreal Alouettes and a Carolina pit bull named "Bo-trac" as its new members.

On Friday, Chip Brown publishes his story about the Pac-10's plan to take six teams from the Big 12 and form a new super conference with two divisions and a championship game. The six teams are Texas, Oklahoma, Colorado, Oklahoma State, Texas Tech, and Texas A&M.

IS THIS THE ONLY PLAN THEY HAD? No. The Pac-10 actually had four scenarios on the table, and one was even more balls-out crazy. A full proposed 22 team merger with the Big 12 is still on the table for Pac-10 commissioner Larry Scott; so is a two-team expansion with Utah and Colorado, and so is a final and very important option, doing absolutely nothing. Don't forget that one. It's important.

WHO THE HELL IS LARRY SCOTT?  The new Pac-10 president leading the counter-charge to the Big Ten. Expectations were universally low for Scott coming in as a women's tennis exec whose last college football game was Harvard/Yale in another millennium. Then again, Scott is a Harvard graduate with a BA in European History, so perhaps the Big 12 looked more like any number of easily dismantled political bodies littering the course of history than any other major college football conference .

WHY IS THIS EVEN BEING CONSIDERED RARGH MY MEDS GET OFF MY LAWN FUTURE FOOTBALL? We know: it's all very frightening and disorienting. Here's a picture of LIllian Gish to ease the pain, old 96er. 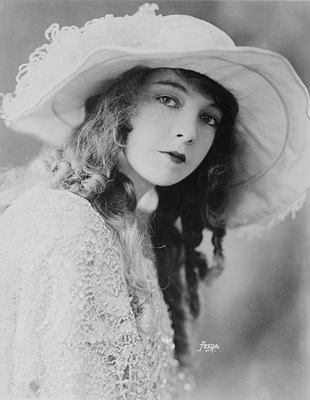 The Pac-10 is doing this for many reasons. They're doing this because their television revenue sucks, the product of Tom Hansen's completely negligent dealings in this department. Revenue is currently split unevenly between the teams, just as it is in the Big 12, but done through an unnecessarily arcane system of percentage splits. The overall results do not stack up well against other conferences in revenue. The Pac-10 in 2008 earned $43.25 million in television revenue. In contrast, this past week the SEC handed out $209 million combined to its member schools, and the Big Ten's  per school handout (while only an estimate) is conservatively in the $20 million range for each conference member.

(It's likely more than that, but Jim Delany does not kiss and tell.)

(Unless you're a slut and deserve it.)

That's poor pimpin', and it is reason one to expand in a time when Cal had to take a bus to games instead of flying this year. Other reasons are simply window dressing.

WAS THIS UNEXPECTED? Yes, but in hindsight not as much as one might think. Sharing a network with the Big 12 had already been proposed, so this really just involved the Machiavellian stretch of marrying self-interest with the willingness to slit another conference's throat before they knew what was happening. It's just business, Dan Beebe.

SHOULD I ATTEMPT TO CONVINCE DAN BEEBE OF MY INNOVATIVE NEW COMPUTER, THE A.B.A.C.U.S., HORNSWAGGLE HIM OF MILLIONS, AND THEN PRESENT HIM WITH AN ABACUS AS A LEGAL SCAM? You could, since the Big 12 Commissioner might fall for the ruse.  Caught completely flatfooted by this, the Big 12 went into ninth-degree panic mode on Friday, cancelling press conferences and watching as member ADs declared their own lack of loyalty to the conference in the lobby.  Dan Wetzel's column here contains a lot of columnist hyperbole--much of it inaccurate and sensationalized--but he is right on one thing: Beebe got played, yo.

SO WHICH ELEMENT OF THIS STORY WOULD BE ESTIMATED AS MOST CRUCIAL? Texas. At this point in the narrative we remind you how independent and self-interested everyone in this story truly is. No one is compelled by anything here but their own interests as defined by the schools themselves, including the great counterweight in all of this, Texas, the one school that could scuttle this entire reshuffling and turn what appeared to be a revolution into a fizzled coup.

Texas has options of their own. As a target of both the Big Ten and Big 12, it could get a lot of skin flashed at them for very little unwinding of their money roll. The Big Ten offers more fixed, defined, and limited terms of engagement in terms of potential revenue, scheduling, and share of the league's profits. COLLEGE FOOTBALL, on the other hand, would be able to offer Texas additional bonuses it might not have in the Big Ten (a larger slice of revenue, for instance, scheduling preferences, etc.) All of these promises would be contractual fictions until seen, of course, unlike the hard promises of the Big Ten.

THEY'VE ALREADY GOT THE BRANDING RIGHT? Sega was on this shit so long before the rest of us: 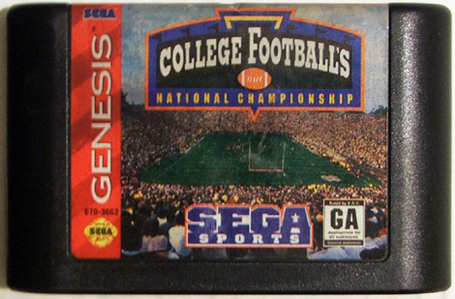 WERE YOU EVER ABLE TO DEFEND JEROME BETTIS ON THE TOSS SWEEP IN THAT GAME? No, never. He was unstoppable, and the source of at least one fistfight between the brothers Swindle.

IS THAT WHAT THEY'RE CALLING IT? No. As far as we know there is no name for the merged Pac-10/ Big 12, but if we were Larry Scott we'd enjoy pissing people off, and thus would simply refer to the conference as "COLLEGE FOOTBALL," and thus attempt to burst a few pipes in Jim Delany's brain.

DID DELANY REALLY MAKE REPORTERS WAIT OUTSIDE ON SUNDAY RATHER THAN LETTING THEM IN THE FOYER OF THE BUILDING WHERE THE BIG TEN WAS MEETING? For a while at least, yes. Delany would have been a brilliant Cold War spymaster.

DOES TEXAS HAVE COMPLETE FREEDOM? No. They have asshole relatives like everyone else, in this case the the assholes being the Texas State Legislature, a body so determined to get their dick swinging measured into the calculus here that taking Texas A&M along with Texas isn't even a bargaining chip, but is instead a given. In addition to tacking the Aggies and the Red Raiders onto the deal along with Texas, anyone who wants the Longhorns may have to take Baylor thanks to a group of legislators agitating for the Bears' inclusion in all this.

You may recall this happened last time expansion rolled through the Dust Bowl, and that Ann Richards strangled a man in front of a horrified but impressed legislature to show her seriousness. She's dead, a factor which reduces the chance of Baylor bumping a team like Colorado significantly, but it is still in play. Someone may be asphyxiated to prove a point in this debate yet.

COULD TEXAS DO NOTHING? Yes. Remember that in all of this, doing nothing and standing pat is always an option. With the Big 12 Texas has a low-effort independent deal in practice already, taking an uneven and generous cut of television revenues and playing a conference that on the whole cannot keep up with its budget, recruiting, and brand profile. We just used the term "brand," and thus proved that we're all moving towards the "Hipster Runoff Singularity" of everyone discussing "brands" in "quotes" all the "time."

Alternately, Texas could just shoot middle fingers in all directions, nod approvingly at Notre Dame, and go full independent. Remember that, too: one response to all of this potential alignment would be labor-intensive but possibly lucrative non-alignment. If you don't think Mack Brown could strike a Marshal Tito pose and hold it for a decade or two, you're underestimating his fondness for epaulets.

WHAT ABOUT NOTRE DAME? Well, if they're in they better hurry up about it. One expansion theory has Notre Dame as the pivot point for the entire landscape of college football, not Texas. If ND joins the Big Televen, they become the Grande Diez, pick up a significant national television draw, add eyeballs all over the place, balance out into six team divisions for championship game alignment, and possibly solve all of their problems at once. The Big Ten stands pat, turtles up, and continues to build their kingdom built of dippin' cheese and fine American shaving cream while leaving Nebraska and Mizzou--the two Big 12 teams most likely poached from the conference--out in the cold in a drifting, burning wreck of a conference.

If they don't go, however, then the other options listed remain on the table (in this theory, at least.)

ARE WE AT FULL HAM?

Yes we are. DANCE BREAK.

HOW FAST IS THIS ALL HAPPENING? For large organizations resistant to change? Very, very quickly. Scott may fire when ready per the Pac-10, and could announce the formal expansion as soon as July 27th at the Pac-10's Media Days in New York.  Offers could go out by Friday of this week, however, and could rapidly push forward the deadlines and timeframes for everyone, the Big Televen included.

You may notice that the Pac-10 is having their media days this year on the opposite coast. There are reasons for this, and they should be very obvious. If not, we will remind you part of this itinerary includes a long visit to ESPN's studios in Bristol. Tom Hansen, former Pac-10 commissioner, would have settled for tasteful telegrams sent to illustrious columnists at important newspapers in Bangkok, London, and across the relevant spots in the British Empire and associated territories.

WON'T SOMEONE THINK OF POOR BOISE? You're keeping the Mountain West from their favorite piece of blue turf, dammit.

WHAT'S THE SEC GOING TO DO ABOUT THIS? By all indications, a hot load of jack-nothing, man. Happy to stay out of this, the SEC appears to have battened the hatches and is spending the summer watching the Big Ten and Pac-10 take turns setting the Big 12 on fire at their neighborhood barbecue. We like to think of this as an event, where the Big 12 received an invitation saying "We're having you over for dinner!", and then discovered the invitation was really and truly more literal than they expected. The cannibalism is, from this perspective, very entertaining.

WHAT DOES THIS MEAN FOR THE BCS? Some reconstitution, and an even dicier existence when renegotiation time rolls around after the contract ends in 2014. At that point you might have two huge megaconferences who most likely will not have undefeated teams going into the championship game, much less coming out of one. Using the current model, this could mean an ever-more-crushing pile of one-loss teams at the top of college football, further absurdity, and worse still more horrifically disingenuous PR from the BCS claiming out it works. The BCS could survive, but the possibility of a plus one scenario gets even more likely for 2015 under certain realignment situations.

It also gets less likely in others. WHEE FUN EQUIVOCATION.

IS THAT EVERYTHING? Hell no. This rolls on. For the moment, though, that should get us all caught up and breathless before the Big East announced their merger with the NFC East and the Jamaican Cricket League in the next 24 hours.