THE BIG 12 HITS THE BUTTON. 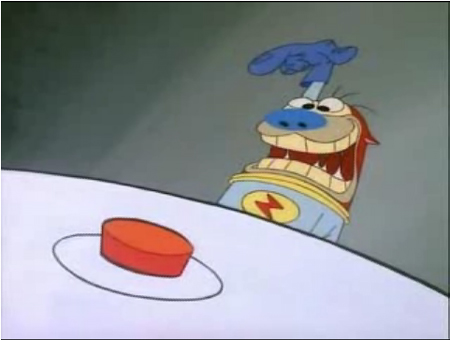 The Big 12's Commissioner Dan Beebe and the collected ADs of the conference walked out of the meetings in Kansas City to find it: the shiny button. The red, shiny button. The History Eraser Button. PAC 10 Commissioner Larry Scott thought they might like it, even though they musn't press the button that would take Texas, Texas A&M, Oklahoma, Oklahoma State, Colorado, and Texas Tech out of the conference and add them to a proposed superconference with the current PAC 10, an arrangement whose collected revenue would dwarf the Big 12's to an extent that, when considered, left the ADs with visible and uncontrollable bulges in their pants. 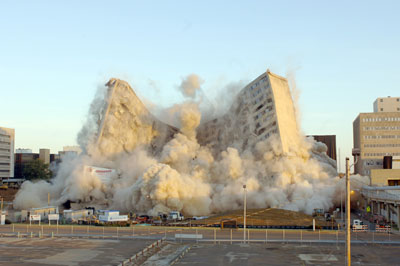 THE BUTTON. Oh, so shiny. Oh so tempting.  People often fumble when confronted with it. Some lose their cool altogether. Missouri's chancellor, seeing it sitting there in the lobby, seeing how SHINY it was, all but ditched the conference on the spot like the Czechs raising a middle finger to their masters in '89 and turning the borders loose. Press conferences were postponed, then cancelled altogether, and the conference commissioner only had closing elevator doors to protect him. If they had thought ahead, they would have brought pepper spray. As it stood, even the worst, most distracted and lazy observer had no word for it but "chaos." Men in suits of expensive nature and vaunted composure were reduced to gibbering platitudes, and then flight. 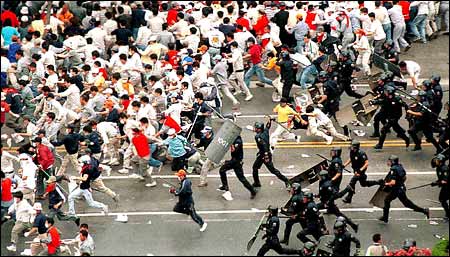 NOT EVEN THE WORST COMMISSIONER IN SPORTS COULD IGNORE ITS APPEAL AND LUSTER. So there it sat for all to behold and ponder and ultimately flee from, powered by a testicularity Larry Scott could not be previously suspected of as a former tennis exec whose last football game attended was confessed to be Harvard/ Yale, not anything as titanic as anything he'd oversee as commissioner of the Holy Throwin' Empire he was proposing. He's denying it, but even if the linchpin to all this--Texas---doesn't come on board and thus throws off the whole scheme, that is beyond large thinking. That's like Stalin-big, madman big, a concept so big the man must have a streak of genocidal insanity to him or else be operating under the complete ignorant bliss that sometimes produces spectacular ideas by chance. From the surface of this proposed new universe, all we can see are balls. Huge, ballsy balls, sir. 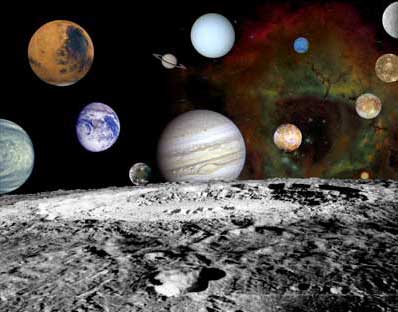 PROVISIONALS: IF this even happened and everyone somehow agreed to leave and form this superconference, the Division B of this proposed Megazord conference would be an imposing, barren reflection of man's desert soul, the No Country for Old Men Division: Texas, Texas Tech, Texas A&M, Oklahoma, Oklahoma State, Colorado, Arizona, and Arizona State. An imposing, harsh, and majestic stretch of land that is, sirs and madams, and one where the BCS in its current form goes to die, since current conference tie-ins under realignment--already hopelessly screwed in existing expansion scenarios--are nasty doublefucked under this. 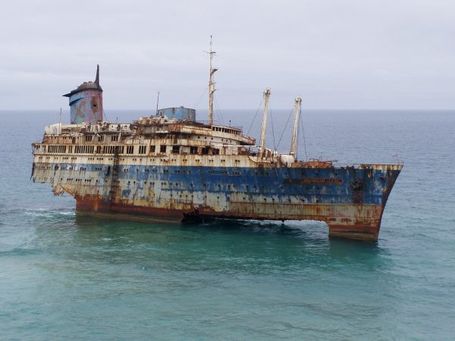 The BCS, however, can receive transplants, suffer a few amputations, and live on in some mutant form. The Big 12 is a donor body now, and will come off the table cold and flatlined.

HALLO WE ARE ENDLESSLY POSTPONED OR MAYBE NOT. Either the NCAA is going to release the report to USC today at 10 a.m. EDT, or you will continue to wait despite the round of reports this week that Friday was the day this was definitely going to happen. Your frustrations in this matter are neither unusual nor irrational, but you will likely continue to wait because as secretive as the NCAA has been, bureaucrats are cheap canoes: durable, hollow inside, and prone to leaking but somehow staying afloat. We stand by our bet of everyone hating whatever happens on all sides.

THE PRE-EMPTIVE BUBBLE STRIKE. Matt Hayes cannily sees your dark horse and shoots it out from underneath you before it even makes the post. Just like in Red Dead Redemption, you may simply whistle for another one, and it will appear without noticing the smoking corpse of the horse you just dispatched. (Mississippi State, anyone? Yes! Why, what a capital idea BLAMMO! /horsedrops)

IF THIS HOLDS ANY VALUE: then Auburn and Iowa State should align in a Chizik Axis and control their respective spheres.

NEVER MISTAKE ACTIVITY FOR ACHIEVEMENT. One of the world's most bullshit-free individuals, John Wooden, is in grave condition at UCLA's Medical Center. As an undergrad we took "Coaching Football" at the University of Florida, and Steve Spurrier's class focused almost entirely on John Wooden, how he ran his program, and how Spurrier attempted to translate the Bruins' spectacular hoops dynasty to the football field. His influence spreads past the basketball court and into--as cliched a statement as this might be--to the way people lived and continue to live. Few can say something like that at the end of their lives with any certainty of its truth or absolute value. John Wooden does not have this problem.