THERE ARE BAD STATUES AND YOU DON'T WANT TO BUY THEM. 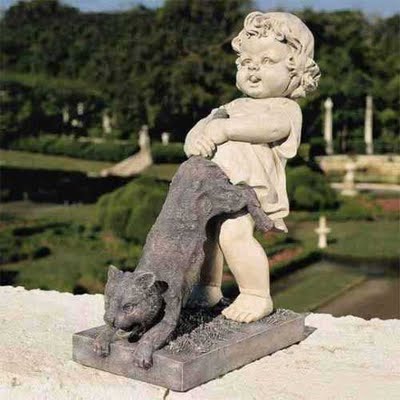 There are bad statues, and worse statues, and then there is whatever the hell got sent to Alabama for Nick Saban's statue to be placed outside Bryant-Denny stadium. Versions one and two have been rejected for inaccuracies in the hair and face, though exactly what facial/hair inaccuracies those are boggle the imagination. Did they give him an eyepatch? Were eyes a glowing shade of red a few notches off from the actual color of his eyes? Did the sculptor give him a bald spot? Better yet, did he give him a mohawk? Did they add a Heidelberg scar, or get Saban in an expression resembling the DERP face? Did they have him wrestilng a cat in a manner suggesting bestial intercourse? PLEASE SAY THEY HAD HIM MAKING LOVE TO A GIANT CAT. "That cat is the most satisfied pussy ever born right thurr." <-----Alabama fan beholding statue.

TOMMY TUBERVILLE SAYS FRANK iS BOTH A WAY OF LIFE AND A NICKNAME FOR FRANCIS. A man who clearly has moved past the giving of damns in his life:

I just don’t think this conference will last long because there’s just too much disparity between all the teams here. I’ve just noticed that – in the SEC, for instance, Vanderbilt makes as much money in the TV contract as Florida. Everyone is good with it, everybody’s on the same page, gets the same amount of votes...Being here for six months, I’ve just kind of noticed there’s just not a lot of camaraderie in this league like you have in the SEC. … It starts with the commissioner. And I think (SEC commissioner) Mike Slive has done a good job. (Former SEC commissioner) Roy Kramer did a good job of building a base where everybody was on the same page. And that just has not happened here in the Big 12. It’s just a matter of time, to be honest with you, unless they get everybody on the same page."

AU REVOIR, HELMETS. We're seriously not trying to be a contrarian dick straight from the comment threads of a Cato Institute article, but if you're concerned about head injuriy and lasting brain trauma in football, the first place you go isn't a bigger helmet but a smaller helmet. It's false armor at this point, and a safety blanket taken by players into head-first collisions that are common at the college level and epidemic at the pro level. (For some reason the NFL tolerates helmet to helmet in almost every instance NOT involving a quarterback, but practically exiles players for qb contact of any sort.)

The costs, as In the Bleachers writes, aren't just for those who cash an NFL paycheck, but for those who played the game down to the local level. It's a violent sport, but if you want more form tackling and less spearing, you start by moving closer to rugby and away from what the sport currently is, and you do it before litigation (inevitable, horrid litigation) forces the sport to do what it's going to do anyway.

HEY MAN, JUST GIMME A BIG TARP AND SOME BUNGEE CORDS AND WE'LL DO IT FOR EIGHT GRAND. There have to be cheaper ways to get a retractable roof in the Georgia Dome without spending the equivalent of a new stadium's budget on making the Dome into a convertible.

MMM, NOW THAT'S A DICK MOVE. We have a loooooong post on this coming, but yes: kicking a field goal to break up a hopeless shutout is totally a dick move, Voodoo Five. USF fans might even call it a slap in the face to common decency and valor HAHAHAHA GET IT SLAPPING AND JIM LEAVITT---

GONE BEFORE WE KNEW YE: The three Bruins involved in purse acquisition of an illicit nature have been dismissed from the Bruins football team before playing a single down. GO BRUINS. Rick Neuheisel is now taking wagers of an informal and non-cash-denominated nature on UCLA not having another disciplinary issue for the rest of the year, but keep it on the DL, please.

RETIREMENT IS BULLSHIT. Fishing. Golf. Telling Kentucky to move into the 21st century. Going to funerals. It's a life, we guess, for Rich Brooks, who reminds you that the grim pacing of the sun around the sky is ironic. He's just up there killing time like the rest of us.