PATRON SAINT: ROBERT "PADDY" MAYNE
By default we salute men who regard law school as some kind of anonymous post in life that you pass without recognition while riding a horse made of flame, so Lieutenant Colonel Robert "Paddy" Mayne qualifies instantly as a Digital Viking candidate. A low bar to entry, you say? Well, we're just getting started here. Pull up a chair, and please don't look Mr. Mayne in the eye, or he will come back to life and beat you and every single one of your relatives to mashed bologna.
Mayne only lived to 40, and died after a long night of drinking and playing poker. Yes, come here a few inches closer to buying in, and then scoot a few more over when we disclose Mayne's ownership of several different overlapping spheres of lightspeed drunkenness: special forces soldier, professional rugby player, Irish, and just plain fucking crazy.
Did we mention polar explorer? We just did. For kicks, after fighting behind enemy lines with the SAS, assaulting his commanding officer, often fighting drunk, and then getting drunk and demolishing hotels while on leave, Mayne decided to keep himself busy after the war by taking an assignment in the Falkland Islands to serve as a polar surveyor. If you wonder why there are no polar bears in Antarctica, it's because Mayne beat them all to death one night after losing a booze-soaked 16 hour game of whist in a freezing quonset hut.
Mayne was also regarded as one of the best rubgy union players of his time,  may have fought and fought well in World War Two while completely hammered, and spent his retirement drinking, challenging roomfuls of people to fights, and complaining about his back while trying to watch rugby. You just rewrote your retirement plans, but don't tell anyone, since you probably planned on doing two out of those three anyways.
BONUS BRAWLING PATRON SAINT: Mike Vallely
Vallely is a skateboarder, but he's known as much for his ability to beat up several people at once, but only once his shirt comes off. Don't ever, ever make him take his shirt off.
In his spare time, Vallely beats up drunk assholes at hockey games, slaps security guards, and scrapbooks with his daughter.
DRINK.

Holly: Via intrepid reader Alan, meet Chatham Artillery Punch (served at functions of this oldest of Georgia’s Military Units since George Washington’s time).  It's billed as a darker, smokier, sparkling version of Long Island Iced Tea (no white liquors, only brown, and please don't make me have to tell you to use dark sugar). Construction:

Mix all ingredients except champagne. Cover and refrigerate for several days. Stir in champagne just before serving.

Quoth Alan: "Our current private stock is 15 years old and resting in a variety of bottles.  This is the Revolutionary War version of PURPLE JESUS."

Orson: The Falcon Punch. It sounds horrible, but it would allow for an EDSBS-specific variation where you salute, say "Show me your moves!" and then immediately have a friend taunt you, after which you short-arm him, drop him to the floor Blount-style, and then bounce backwards nodding your head in celebration. For bonus points, consider having friends hold you back to prevent your violent entry into a crowd of horrified onlookers.

BONUS BOOZE-Y PICK: It's so goddamn hot right now the feverish may flee into the arms of beer alone, but for panty-dropping and show stopping don't sleep on champagne. (General rule: don't ever, ever sleep on champagne when it's hot, since it's usually served ice cold, improves the mood for at least fifteen minutes, and justifies a good hot weather nap when you inevitably crash.)

A quality--and thoroughly classic--addition to the champagne canon is the Stoli-Boli, also known as the "Pats" after Absolutely Fabulous character Pats, who frequently consumed this in between lines of cocaine and episodes of waking up on garbage scows after drinking. (Doing. It. Right.)  Started as a joke, it's actually quite a practical cocktail for the endurance bender, and has the mysterious effect of, by the addition of vodka, a lessening of champagne's Hitler hangover. 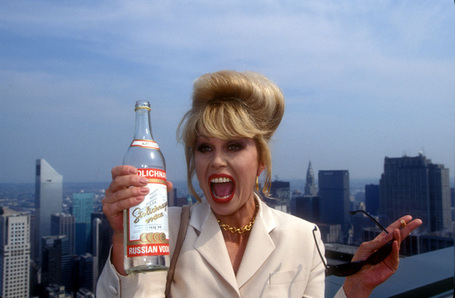 Add more vodka. These instructions have never hurt anyone.

This recipe recommends going 3/1 with champagne to vodka, but owner's manual on your car says not to exceed the speed limits, and the manual that came with our shotgun said we shouldn't pack the barrel with phosphorous before firing it, so just go ahead and make it an even 1/1 if everything's cold. You'll be pouring them that way anyway after two or three, because the kick is sneaker than a Manila pickpocket and fiendishly strong.

In later seasons Pats and Edina drank something called a Veuve and Bourb, but we're not even going there with you. The native guides can only take you this far. Across that river of brown liquor lie demons we fear, and no amount of your falang money will make us walk over that torrent with you. Good luck.

Orson: Fried Oysters. Everyone will sing the superiority of the raw kind, and that's a given we won't fight: raw oysters and cold alcohol are the high end apogee of fine livin', caviar be damned. Conditions are not always optimal, however, for raw consumption, and in that case you can more than have your oyster fix and double down on the batter tooth with the fried variety. We like imagining them as something virginal, pure, and untouched turned into a lusty, maniacally sexual whorebot by the deep fryer, a case study in ruin like Uma Thurman's character in Dangerous Liasons.

Oh, naughty hot maid. You didn't want to become a batter-fried pleasure machine. But you'll be devoured all the same: 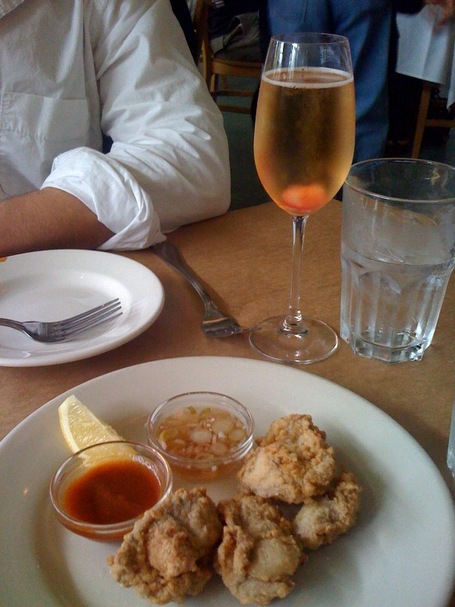 That champagne cocktail, btw, is not a Stoli-Boli, and despite several expensive ingredients still ended up tasting like Mad Dog 20/20. Keep it simple unless you're getting 18 year olds drunk, which if you are then good for you. Someone has to, dammit.

Bonus Happy Fun Time Pick: Fresh summer corn cooked in a cast iron skillet. For some reason the iron skillet matters, since it just tastes so much better. I don't even add butter to mine, since it turns into a kind of candy the minute it hits the heat. Plus you get to stop by the side of the road to buy it in some places, which is great because they have the best meth tomatoes at those places.

Holly: Big Wangs' Heart Attack Fries. The lovely Sarah Sprague and I have a standing date each year to meet at this trash-ass Hollywood sports bar, to watch the Pro Bowl (BECAUSE WE CARE AND ONLY WE CARE) and suck down blueberry tonics in pint glasses. This is what we eat. 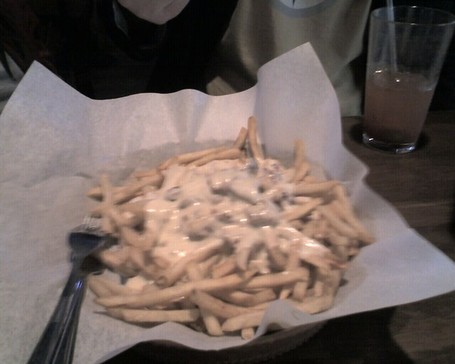 This is a SINGLE ORDER of french fries, covered in bacon, parsley, and MOTHERFUCKING ALFREDO SAUCE. Your argument is invalid.

Holly: Reaching a little for this category this week, but it's worth it, because who wants to see two planes land after being fused together in a midair collision? YOU DO YOU DO:


HAPPY FUN TIME BONUS PICK:  Does it count as combustible if it just blows your mind? It does, right?

The Big Ten has already said you may not bring a giant vuvuzela into stadiums, while the ACC says it's just fine PLEASE NOTICE US AND LOOK AT US LIKE WE'RE ALIVE OVER HERE.

BONUS COMBUSTIBLE: Even Russian dogs are harder than you will ever be, tovarech.

Orson: We hate golf, but it would be fantastic to play a lightning round of the sport the dead call boring with The Tumbler Golf Cart. 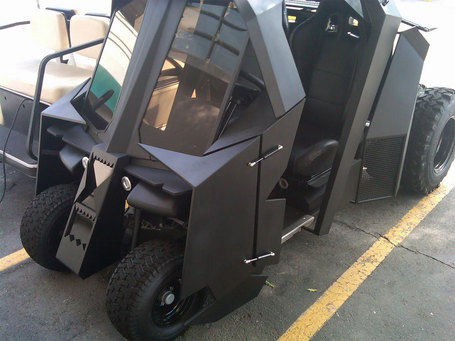 Bonus Transit: Hungarian micro-cars. We'd buy twenty-two of them and make them play a game of football, but only running the wishbone just to see if we could unclog the backfield successfully for just one play.

Holly: The deceptively simple Citroën 2CV was nicknamed "deux chevaux," for "two horses"; that is itself misleading, for the original 2CV had nine whole horses-of-power. 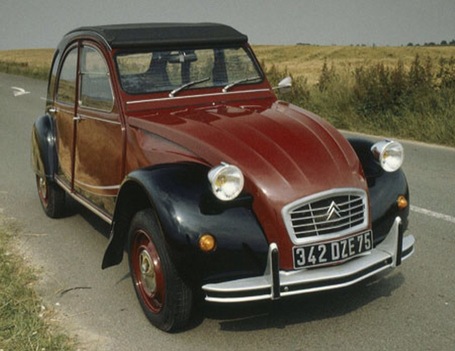 But as slow and goofy-looking as it was -- its other prominent nickname was "the Tin Snail" -- the 2CV developed a reputation as the Francophone VW Beetle: efficient, cheap to run, and almost absurdly easy to fix and maintain. 2CVs were well-known for racking up hundreds of thousands of miles, and if one finally, irreparably bit the dust, you could run out and get another one for a couple hundred francs, easily. For paradoxically toeing the line between "completely disposable" and "lovably indispensable" -- and for giving three carloads of evil henchmen the highly embarrassing drop in "For Your Eyes Only" -- it deserves a podium in the all-time automotive hall of fame. Where, like a beloved old dog, it can happily leak oil and bounce wildly on its springy suspension in perpetuity.

HAPPY FUN TIME BONUS PICK:  This little number, for the possibility it raises of playing flip-cup while waiting for a boob scan.

Holly:  The 35th anniversary of Jaws was last weekend, a weird number to be celebrating but a momentous event we're sorry to say we missed out on thanks to a particularly petulant travel schedule. (The sharks, you'll be pleased to know, did not miss celebrating.) To honor America, please enjoy the original creeptastic trailer:

Orson: The Talking Heads, Stop Making Sense.  I saw this movie at a very formative age, and came up with the only job description I've ever been able to solder together for my dream job: whatever that is happening at 1:59 in this version of "Once In A Lifetime" is what i wanted to do with my life.

Still working on that, btw, but getting closer to convulsing for money every day is the goal. The soundtrack is phenomenal, too, with Bernie Worrell and a crew of Parliament/Funkadelic refugees. The Pro-Geek thing may have been Rivers Cuomo's primary key, but no one gets there without a nod to David Byrne, who pioneered being magnetically awkward long before Weezer plugged in an amp.

Bonus canon: Big Boi, Sir Lucious Left Foot: The Diary of Chico Dusty. Muppets, neon 'lacs, and the women he and I hand-picked to represent feminine perfection all in the same video. Okay, I'm not actually helping Big Boi cast videos, but even if I did it would look the same, because he is incapable of misjudging these things based on this and any other video Outkast ever made.