Share All sharing options for: COLLEGE FOOTBALL TELEVISION SOMEHOW CONTINUES TO BE UNGOOD

When you acquire responsibilities in life, go ahead and erase one piece of the canon you keep up with. As a half-adult, the first to go is music, since that requires real work and research to keep up with, and then movies because two hours is a long and possibly unprofitable time to sit still and pay attention to something. If you have a significant other, forget watching anything you absolutely want to, either, something Hollywood has clumsily acknowledged by sandwiching together the action movie with the rom-com in Mr and Mrs Smith and that one wherea gay pygmy drives around with a big blonde duck on the back of his motorcycle.

The last to go is television, since television is the most passive and easiest to acquire without effort, which is why the lack of a quality college football program actually bothers us, especially since Friday Night Lights has managed to survive just depicting the ins and outs of a high school football program, a storyline with far less meat than the chaos of a college program. (People barely ever shoot each other at the high school level. How can that be interesting?)

We've never seen Blue Mountain State, but suspect it misses the mark since it's been described as for those who saw Porky's and "felt that the jokes were a little too high-brow." This also doesn't look very promising both because the guy who wrote The Love Guru is associated with it, and because Nick Nolte is mentioned nowhere in connection with it. They could just turn on the camera, dress him up like a coach, give him all the hallucinogenic toads and GHB he could handle, and let him riff on camera during his scenes until he started taking his clothes off and playing Russian Roulette with an angry pit bull taped to his hand.*

That's not to say that no television show hasn't come close to approximating at least part of the college football universe here. It's been done before, and done successfully. 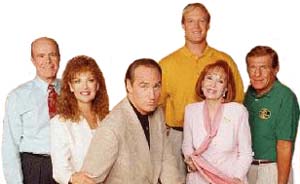 Minnesota State has never known a finer coach than Hayden Fox, who in no way resembles Hayden Fry. Okay, he's totally Hayden Fry, and Dauber is like a cornfed Mike Dubose of Phil Fulmer or other cornfed lineman lunkhead who fell into coaching, and Luther is so obviously Lou Holtz's less successful younger brother Marty. Hayden Fox was also the only coach to ever pull a recruit from the afterlife through a TV, because Craig T. Nelson has those powers and retains them to this day. Also, we'd have taken a turn with Shelly Fabares, if only to say we'd had secondary sex with Elvis.

*Awesome game because YOU ALWAYS LOSE.