A GUEST COMMENTARY FROM LANE KIFFIN

Share All sharing options for: A GUEST COMMENTARY FROM LANE KIFFIN

A word from Lane Kiffin on billboards potentially aimed in his direction. 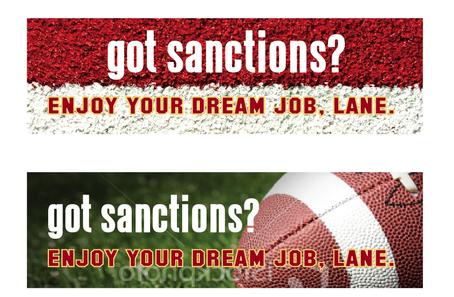 Too bad, cause the Testicular Particular Express  is making a stop at DROPPIN MOTHERFUCKIN' SCIENCE STATION just for you, Tennessee fans.

I DO have sanctions, pal. Big ones. BIG SANCTIONS THAT YOUR MOTHER LOVED LAST NIGHT. My sanctions drop out of my pants in the locker room and people are like, "Whoa, Lane, are you Alabaman?" And I'm like, "Only from the waist down!" Then like EVERYONE LAUGHS and points and takes pictures of my sanctions like they're prize fish hanging from my man hook, and they take pictures of it and send it to their wives, who then share them with influential and wealthy famous people.

I'm not even talking about sanctions anymore. It's like some kind of literary device I'm on right now. You wouldn't understand. It's next level stuff.

We're excited about it. Lots of energy.

(SHHHHHH. I'm talking about my dick!)

So yeah, go ahead and tell me to enjoy my dream job, too. I do. Watch how much I'm enjoying it, barn-balls. Hey! Crotch-rot! Mine's empty over here!

I'm megasuper enjoying the hell out of my dream job, suckers. Go ahead and put a billboard up. I'll put up two, one that says, "YEAH I AM," and another that just has my balls on it and a picture that says, "Your mother's chin-rest." That's more advanced literary talk, but you'll figure it out just about the time I get back from getting my pineapple waxed in Maui.

I'll be starring in a show down there called Log the Booty Hunter, and I'll be playing the lead. With my genitals. That's a fancy word for "acting chops," but don't worry about it. It's gonna make a million dollars, and then I'll just spend all of it buying billboards in Tennessee that say "I just set a homeless man on fire under an overpass while Paris Hilton laughed and filmed it because this is LA, I'm famous, and can therefore do anything which is SO much better than your busted Dollywood shit."

Unless I decide to quit and sign on to another show after one season AHAHHAHAH SUCK IT TENNESSEE.

PS. I left a carton of milk somewhere in the athletic department's offices. You'll find it by the smell eventually.