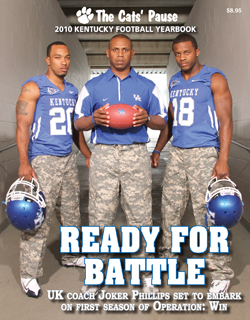 Oh, battle camo: will you never lose your appeal to football players wishing to make a motivational statement of dubious validity? We would love it if someone just posted a bunch of players not in camo or looking fierce, but just hanging out at a barbecue with canned beers, a game of cornhole going in the back, some bikini-topped ladies wandering around, and the coach passed out facefirst on the table. If you actually want to see this very thing, you'll only have to wait a month or so for Arizona State's poster to come out because that is exactly what it will be.

Also, Joker has some bigass hands there. TRUCK-A-SAU-RUS.

MOTIVATIONAL TACTiCS, CONT'D. Urban Meyer hasn't found the motivational mantra for this season yet, but he's lying, since our sources and yours both know it involves sending gangs of midgets wearing Nick Saban masks with tasers and billy clubs after Florida players when they least expect it throughout the offseason. If you see this in the Oaks Mall or other Gainesville haunt, let it proceed and do not interfere, since the savage beating of up to ten midgets at a time is all part of the process.

AND WHILE DISCUSSING FLORIDA: For realz,the ban-hammer is used wisely in some instances, and extremely wisely in others.

I'M SURE A RECRUIT THAT LOW-PROFILE WILL REMAIN COMMITTED. The whole DERPends Crew went to comfort Seantrel in his time of need, shortly before he goes to Ohio State like he wanted to in the first place. In other Kiffin news, Tony Basilio reports of their outrage at having recruits poached from them by, among others, Tennessee. Life is a far better author of ironies than you could ever be, and if you don't believe it google "Tulane," "Ed Orgeron," and "Katrina."

THE MOST NAKED GRAB FOR PAGEVIEWS EVER. It's a shameless, borderline sexist, lascivious, voyeuristic, and cheap attempt at grabbing eyeballs on the internet using tangentially "sports-related" topics to post a video of LSU's dance tryouts featuring barely clothed young women in various shades of physical duress. We'd never tell you to watch it. NEVER. (Go watch it.) (/ashamed.)

YOU SHOULD PROBABLY WATCH THE TWO ESCOBARS. It was undoubtedly the most blood and gore ESPN has shown in a thirty minute span since last year's Holiday Bowl, but  The Two Escobars was worth it for the harrowing story of the 1994 Colombian national team and their now extremely understandable collapse. We joke about gamblers using death threats to control lineups, but Colombian drug lords actually did that and way, way more. The only comic relief came in the sight of Jose Rene Higuita, the original goalie for the team who is Rick James' body double.