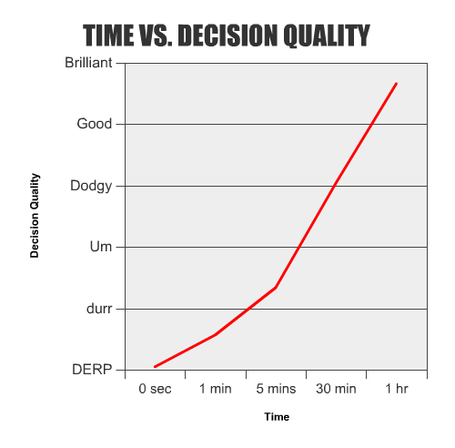 TIME VERSUS DECISION MAKING = DERRRRRRRP. The result has to be somewhere around DERP level for Florida state safety Ed Imeokparia in his theft of a phone from a Panama City cellphone store, since so many things scream insta-stupidity about the crime: the sudden nabbing of a $499 cellphone and not the cheaper, and thus more misdemeanor-friendly phones, and the complete lack of tactics. We at least, for Ed's sake, hope he didn't think about this a lot. If "walking out with the phone in my hand" is the best he could come up with after prolonged thought, then he's in dire straits, brain-wise.

The tally for what is a painful felony grand theft charge is three points for Florida State in the Fulmer Cup.  Florida State fans thus remind you that Florida has had ELEVEN THOUSAND PLAYERS ARRESTED IN THE PAST YEAR.

THIS IS NOT FUNNY. ULM gets four points for a rape case. And now let's squirm uncomfortably.

Note: IRONY DAGGERS to us for investing too little time in the original graph, and reversing our dependent and independent variables. Corrected.