Share All sharing options for: EWW, MATH!: THE PRESEASON FRANKEN-TOP 25

It's one thing for overly caffeinated sportswriters to issue way-early "pre-preseason" top 25s within days (or sometimes hours) of the preceding season's national-title game. Now that we've actually had the opportunity to view some spring games and summer practices, however, the heavy hitters of CFB punditry have begun pumping out some actually relevant preseason rankings, which, taken as a whole, paint a reasonable preview of what we can expect the "official" AP and coaches' preseason rankings to look like.

Ten of those sets of rankings are tallied up in a matrix you can view via this Google spreadsheet. All of the rankings contained herein were plunked down after spring games had started, and they all come from reasonably reputable media outlets, the kind that might actually get to vote in the official polls come this fall -- nobody who goes by the handle "BigPoppaATL" or "TiGeRfReAk2009," in other words. Based on these rankings, it is fair to estimate that the opening polls of the 2010 season might look a little something like this:

Alabama, your more-or-less unanimous Number 1. Apparently the prospect of the Tide returning but two starters on defense bothers the nation's punditocracy not a whit, because everybody put the defending national champions in a nice comfy chaise lounge at the top of the rankings except for two: Phil Steele, who's always sort of marched to the beat of his own drummer because he's Phil Steele and Phil Steele can do whatever the hell Phil Steele wants, and Brett McMurphy of AOL Fanhouse, who is . . . well, innovative in many of his selections. McMurphy totally takes the trendy OMG MID-MAJOR NATIONAL CHAMPION bait in putting Boise State at #1, followed by Iowa, whom he evidently thinks will ride Ricky Stanzi's red-white-and-blue rocket-powered Evel Knievel superbike to the best season in Hawkeye history. (There is almost as much consensus at the spots directly below, with Ohio State barely edging BSU for the #2 ranking -- which means the unthinkable has happened and at least a plurality of the nation thinks Jim Tressel will field an offense this year that moves at a speed faster than "pregnant mastodon.")

Tim Tebow? Never heard of him. Colt McCoy? Him either. Despite losing once-in-a-generation quarterbacks, both Texas and Florida did quite well among the pundits, checking in at consensus #4 and #5, respectively. 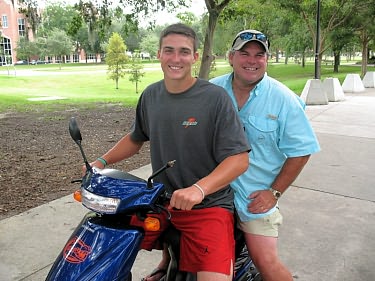 Great moments in standard deviation. The preseason's controversy champion: Your USC Trojans, who ranked everywhere from #3 (Athlon Sports, putting more faith in Kiffykins than anyone besides perhaps Mike Garrett) to not at all (Brett McMurphy and Tony Barnhart, who are old-fashioned guys and need more than a smirk and a hot wife to give their stamp of approval, thank you very much). And this was before the NCAA brought down their Thor-hammer on the Trojans' cranium. Other sources of disagreement: North Carolina, who veers between #10 and #25; Oregon State, unranked on half the lists but as high as 14th on the others; and Da U, which ranges between #4 and #20.

It's still trendy to be, well, trendy. Now is usually the time when the bloom comes off the uber-trendy "pre-preseason" darlings (see: Ole Miss and Oklahoma State last year) and the pundits start to come to their senses, but many of the February/March darlings have retained their brand power well into June. North Carolina clearly remains a darling of the pundits, as does Arkansas, who is ranked on every list (and as high as 14th, by Mark Schlabach, who should know better) despite fielding a defense that, according to the CDC, caused epilepsy in lab rats. Though Jimbo Fisher starts his rookie season already despised by half of Tallahassee, Florida State got a vote from everyone except Lindy's; despite losing its top two offensive stars and switching itse defense to a 3-4, Georgia Tech appeared in all but two sets of rankings and went as high as #13 (Dennis Dodd at CBS). 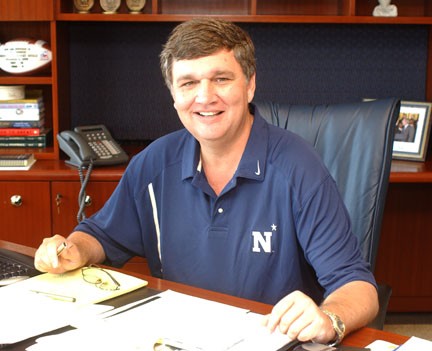 He's only smiling because he's thinking about what a total pussy you are, and that's funny, really.

Obligatory conference chest-pounding. The SEC leads the pack with six teams in the aggregate top 25 (WOOOO), but the ACC, last seen having to throw in two hot dogs and a Toyota RAV4 to get people to buy tickets to its league championship game, surprisingly muscles its way into second place with five. In what doesn't look like a terrific sign of health for the league, the Big [Soon-to-Be-Somewhat-Less-Than-]Twelve only had three teams in the top 25 -- one of which will soon be rubbing elbows with Ohio State and Wisconsin in the Big Ten.

And before anyone asks: No, UAB isn't in there. Whatever, pundits, it's your own graves you're digging.