FULMER CUP: THE BIG BOARD CONTINUES ITS PIRATE WAYS

Share All sharing options for: FULMER CUP: THE BIG BOARD CONTINUES ITS PIRATE WAYS

The Big Board is, as always brought to you by Brian. My, is that the largest tulip poplar you've ever seen? No, it is his penis, and he is taking a nap in the park among the trees to be among equals. The only other time he feels like this? In the company of Reggie Nelson. To the scores: 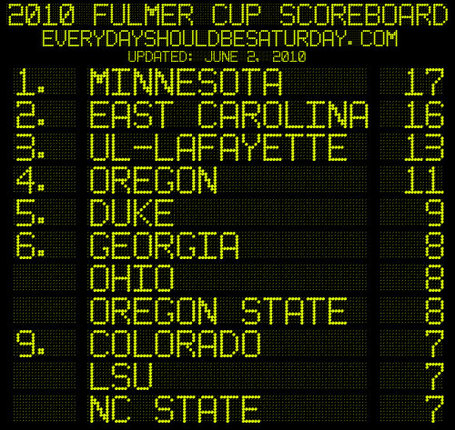 OHIO: Gets four points for Greyhound escape/robbery. No telling where that man went to. If only there were some way of finding out, of finding out where this bus went...DAMN YOU, WILY CRIMINALS!

ECU: Missed any awards for the Wrightsville beach streaker due to pesky "eligibility" rules, but dammit, it would have been so, so glorious if he'd only applied for that crucial seventh year of eligibility.

NEBRASKA: A quiet Cornhuskers offseason is woken up with the loud noise of Niles Paul, Nebraska's senior wideout and most viable playmaking-type person, drunkenly splashing his firehose at full blast against a building in downtown Lincoln in full view of a police officer. Two points are awarded to Nebraska: one for the public urination, and one for the minor in possession. Coach Pelini will deal with you know, and seriously May Some Deity Of Your Choice Kill You Before You Have To Face Coach Pelini.

COLORADO: One point for a piddling failure-to-show. We demand more of our Buffaloes in this department, dammit. Gary Barnett would be appalled at this lack of effort.

MINNESOTA: Holding steady in the only championship Minnesota may win under Tim Brewster.