FIVE THINGS: BUILD YOUR OWN TEAM FROM THE GROUND FLOOR UP

Share All sharing options for: FIVE THINGS: BUILD YOUR OWN TEAM FROM THE GROUND FLOOR UP

Let us play some offseason role-playing. You're the naughty Filipino nurse, and we're Douglas MacArthur, fresh from a stinging defeat at Corregidor. Oh, yes, we do have a wound that has to be tended to. No, it's lower...lower...lower---

AHEM. Different kind of role playing altogether. You, dear reader sit in command of the raw materials of a top 25 football program in average to above average circumstances in this neighborhood. Consider yourself both coach and AD, capable of wielding godlike powers here, powers giving you jurisdiction over the following areas:

Mascots by rule should be carnivorous, nasty, and not of the domesticated variety. (Even in Ohio State's case, they at least took the name of something you cannot eat due to poison.) You cannot duplicate an existing D-1/ FBS mascot, however, forcing you to at least be somewhat creative about this. We opt for the slightly domesticated variety out of necessity, since Gorillas are vegetarians for the most part and thus completely disqualified.

Our team name: the WAR DOGS 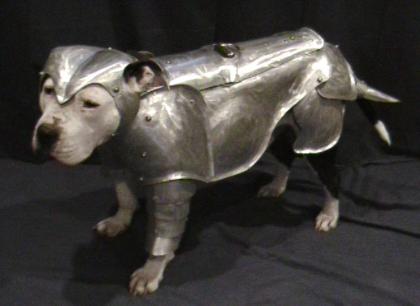 PETA, you say you have a problem with our mascot wearing a suit of armor in 90 degree heat? Feel free to try and take it off of him. Go ahead. Get your hands right in there. He'll think you're offering him eight hot dogs and two Vienna sausages all at once. You'll be his new best friend! Why are you hesitating! He's waiting!

TWO: COACH: By this, we don't mean a specific coach, but rather a type. For entertainment purposes we'll select a coach that drinks, has a familiarity with gambling, is an offensive-minded guy, and has zero control between what goes out from his speech centers to the flapping gums of his mouth, a kind of Switzer meets Spurrier with a tendency to wear pants a few shades too tight because, you know, you gotta put on a show for the ladies in the first ten rows. He will leave this team in the midst of a midlife crisis or in a heap of probation flames, but by Crom it will be a spectacle either way.

THREE: OFFENSE. Spread-option, please. Highly tweakable, full of nightmarish binds to place offenses in, and contrary to popular opinion perfectly capable of producing NFL talent at all positions. It also happens to score a lot of points and is really just a glorified wishbone, and any variety of the 'bone wins buys no drinks around here.

FOUR: DEFENSE. A 4-3 Cover 2 Man. BOOO BORING, we know, but the pressure of two defensive ends blasting off the edge with a pair of physical corners strangling wideouts at the line is too much to resist, and our pet favorite the 3-3-5 usually contains a few good holes the size of Rhode Island in it. (The exotic appeal of wacky blitzes < the agony of watching quarterbacks and running backs zipping through the gaps in coverage.)  Tons of variety in the system, too, especially if you work a hybrid DE/LB in to flex the thing between a 4-3 and a quasi 3-4 look.

If it doesn't contain a hint of murder, it does not belong in the War Dogs mythos.