OTHER MUG SHOT OSCAR NOMINEES, STEP BACK. ECU is awarded no points for this since Matt Pick, a "colorful" former player, is "former," after all, but the one-time walk-on for both the Georgia Bulldogs and ECU was arrested for streaking in Wrightsville Beach, NC, tased, and then took this magnificent portrait for the town's most prolific photographer: 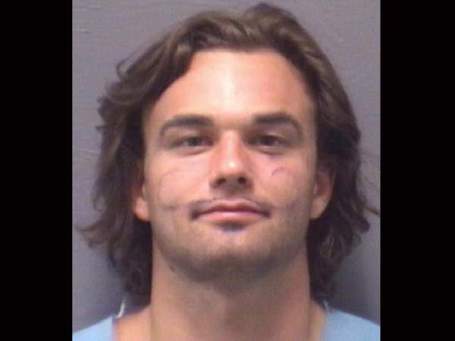 It's a small tragedy that no points may be awarded, but it should just further illustrate the vortex of minor chaos surrounding ECU at the moment. We'd blame the aftermath of a Holtz leaving your school, because they tend to leave this kind of wake whether they mean to or not. Alternately, you could have a hellmouth below your school, and in that case you're just going to have to find yourself a quality vampire slayer FAST.

AM I HAVING--CALCULATING--HU-MANN FUN? Urban Meyer played a jovial role at the SEC's spring meetings, adopting human mannerisms, engaging in discussions of a small nature, and discussing the new programming he was given by engineers to prevent further core breaches in the upcoming season.

He took his daughter to The Masters, visited Rome, even took in a Jimmy Buffett concert. But, no, he didn’t meet the Pope, as was suggested in some media reports. "We went on a little family trip and got to see him, big Gator fan. We talked about third down and 6," beamed Meyer, who was obviously joking. "No ... I did not meet him."

HAHAHAHA HUMOR INITIATE PROGRAMMING LOOP FIVE VOICE BOX FIRE AHAHAHA. Meyer showed no signs of circuit failure, and was led off by his team of tech support for some tweaking before a demonstration of his newfound dancing and stair-climbing abilities. According to Barnhart his biggest test will come 10/2 at Alabama, but that game really means little in terms of long-term planning for the SEC East and a return to the title game<----DOWNPLAYING EXPECTATIONS<----NEXT LEVEL SHIT.

IT COUNTS FOR THIS CASE. Flag Football is not football, unless we're talking cancer survivor Mark Herzlich playing it, and then it totally counts.

DOOLEY WILL NOT BRING MARKERS THIS TIME. Tennessee's new coach gets quoted using "bullshit" in an interview. WIth the departure of Rich Brooks the SEC could face a deficiency of bullshit use, and thus could use Dooley's steel in this department. Additionally it will enrage the Church of Christ types, and that's always a plus in our book.

A POSSIBLE SOLUTION: LET'S JUST PUT THEM IN A REAL CONFERENCE. If Boise joins the Mountain West--as it will likely be invited to do--this cuts two ways for the Greater BCS Co-Prosperity Sphere. While it likely cuts down on Boise's pesky habit of going undefeated against their filo-dough flaky WAC schedule, it also bolsters the Mountain West's claims for inclusion as an AQ conference, a claim made even more legitimate when compared to the continuing subsidy of the Sick Man of BCS Football, the Big East. And this Index, having worked in at least two references from our 20th Century Global History Class, is concluded.