The Fulmer Cup tracks athlete malfeasance across college football and tallies it in mathematical form. We usually don't post anything before the Index unless it is really, really important. Escaping police by getting on a Greyhound bus is just that important, y'all. 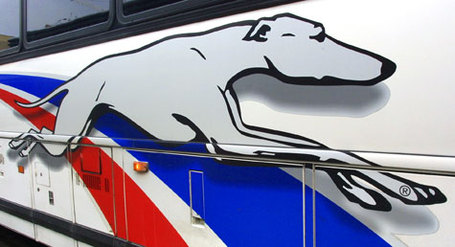 If you ever falsely report a stabbing in Athens, Ohio after breaking into a house and suffering some grievous cuts after plunging through a glass door, remember: Grand Theft Auto rules apply, and you may escape the police simply by climbing on a Greyhound bus, or by paying off the cops as long as your alarm rating doesn't equal four sirens.

Melvin Payne of Ohio University--remember, the only school on record whose players have been charged with punching a police horse--learned well from years of video gameplay, and after botching a robbery at 10:30 p.m. last night decided to cover by reporting the lacerations from a glass door as a stabbing. Botching is defined as doing this:

According to a news release that APD sent out Monday afternoon, the suspect is believed to have suffered his injuries, which according to OU Police Chief Andrew Powers were lacerations to his right arm and left leg, when he ran through an exterior door of 159 Mill St., breaking the glass and knocking the door off its hinges.

THAT'S EXPLOSION OFF THE LINE RIGHT THERE. He left a trail of blood leading back to campus, too, which is good because you'll see that OUPD need as much help as possible in catching anyone.

Payne then bugged out, decided he needed to lay low for a while, and fled as all new fugitives do: into the arms of Greyhound, where he disappeared forever because Greyhound actually leads you to a sideways universe where people disappear forever.

(You know this is true, and you have never seen anyone who got on a Greyhound bus ever again.)

Payne was facing a second-degree felony for the alleged break-in anyway, but a bonus point must be awarded for the cunning bus escape, which took him out of OUPD range, which by this story's parameters must include a three foot circle surrounding any officer and no further. FOUR POINTS for the Bobcats, who remain one of the Fulmer Cup's steady and steadily spectacular dark horse producers.