Share All sharing options for: BREAKING THE HARBAUGH CODE 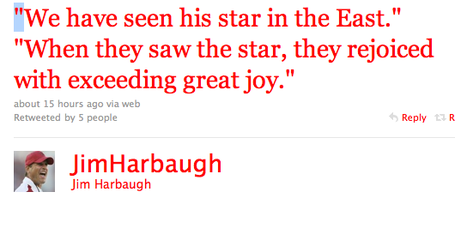 Quick, fetch us an Ivy League douchebag in Harris tweed with elbow patches and greasy hair to read the runes. Oh, thinly veiled proxy for the insecure author who is handsome, irresistible to women, wealthy, successful, witty, sexually gifted, and at least seven other things the author themselves is not. 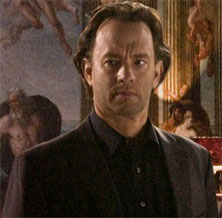 Ah yes. Please crack the code along with us.

Likelihood: After losing track and going for two up by a thousand points over USC, well...it could be. 45% likely.

SNEAKY RECRUITING-ISH: Harbaugh is covertly acknowledging the coup of pulling the number one linebacker in Georgia across the continent to Stanford without ruffling compliance feathers.

WELCOME, UTAH: It's just a subtle way of welcoming Utah to the conference.

Likelihood: 0%, especially since Jim Harbaugh does not know who his conference opponents are week to week, and does not care. (Evidence contained in this picture.)

Likelihood: 0%. Though Michigan alums act like they have membership, they are not in fact part of the Illuminati, and are not allowed to meetings, skull-admiring sessions, or global plot orchestrations.