WHERE IS HIS VUVUZELA? It's impossible to see a man of African descent now in costume sunglasses and not see him blowing a vuvuzela, even if he is going on a children's hospital visit where the constant blaring of a vuvuzela would be disconcerting at best and dangerous for young heart patients at its worst. 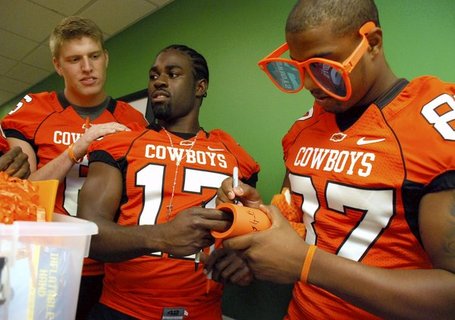 This is from a visit the Cowboys took to a children's hospital, where they could inform sick kids that no matter how dire their illness, they would probably still outlive their doomed conference.

HE HAS AN IRISH TEMPER. Bill Byrne blamed his "irish temper" for what is now his confirmed voicemail challenge to an email sender who accused him of having his tongue up Deloss Dodds' ass,  a charge which would anger anyone who's ever seen the endless stream of barely cooked steaks Dodds feeds on daily.

After reading over 200 similar e-mails the other night, I finally had one set me off and I called the writer. I'm a very competitive person and like many of you, I was raised not to back down when challenged. I've also got a bit of an Irish temper which came across in my voicemail. I regretted what I said as soon as I hung up. I should have been above that, and I made a mistake. For those of you who were offended by my response, I apologize, and I assure you that it will not happen again.

...and for those of you who liked it BILL BYRNE WILL PERSONALLY CALL AND THREATEN YOU OR A FAMILY MEMBER FOR ONLY $199 DOLLARS!  Fundraising was never made so easy.

WOOOHOOO HE IS FUCKING CRAZY! Jerry Jones wants Arkansas back in the Big 12 Metropolitan Area, because somehow a team that has had a decline in national profile would regain it getting hammered by Texas and Oklahoma yearly in the Big 12. To put this in perspective, Jones also wants Notre Dame to join the Big 12, which will happen when hell freezes over or when Charlie Weis' contract is paid off, whichever comes first. (Bet on hell.) Recall that there is no exit fee for leaving the SEC, and that Chip Brown may be getting the crap spun out of him by his Texas contacts.

FETCH ME MY TROLLING MOTOR. Clay is just trolling the crap out of Texas fans at this point, like, to 4chan level trolling. Next week, he will order Mack Brown a pizza, and then watch it delivered over a webcam. Then he will call for a chubbies thread.

WHY, HOW'D YOU KNOW ROSES WERE MY FAVORITE? Ever the romantic, John Marinatto sent Dan Beebe ten roses in honor of saving college football blah blah blah next time send the gift that never stops giving: topless photos taken in front of two rented lions sitting in your backyard. We've been sending them out for years and they never fail to please. The Big East may be on the prowl itself, as they areallegedly seeking to add UCF and Fred Smith's wallet. The prospect of Memphis fans and West Virginia fans meeting in the stands...goodness, that's a lot of home tattooing converging in one place.

LES MILES, ECO-WARRIOR. Missed at the end of this bizarre interview between a Fox News correspondent and Les Miles: the controlled burn where Miles, holding the match, dropped it early on the count of two, and then blamed an assistant for messing up the timing of the whole thing and catching a survey crew in the middle of the inferno.