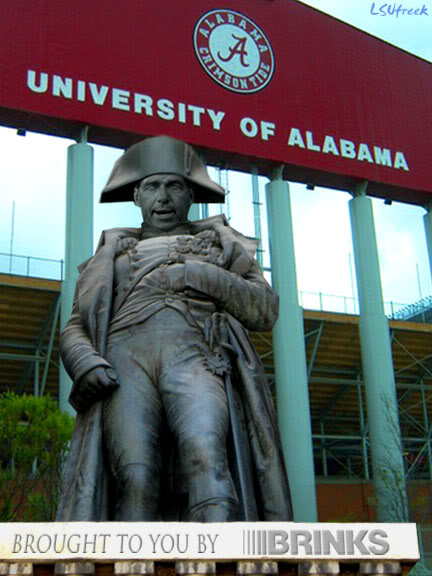 There's a line in here about graven images and worship, but we spent most of CCD drawing chain restaurants into the maps of Jerusalem and finding the most violent Old Testament quotes to use for our "inspirational passage" of the week. Consequently, we spent a lot of time in the priest's office, but didn't even get the consolation of a large class-action settlement for our troubles because our priest was too old to so much as wink inappropriately at us..

Life's unfair like that sometimes, but we do have an enduring affection for Leviticus and no ability to quote anything else from the Bible whatsoever. So you'll have to connect the dots between whatever the Commandments are with the idolatry of Alabama working on their 900 pound statue of Nick Saban, produced at a cost of $50,000 or so and still in transit from its sculptor after some last minute changes. We suspect these were along the lines of "Make his crotch bigger," because if you're paying for a sculpture you may as well make sure everyone takes pictures of it and points to the the goods respectfully.

(Note that at 170 pounds or so, Saban's statue to weight ratio is around 2/9 with his idol. Thus Kansas should thank their lucky stars Mangino didn't become a coaching legend, as the statue would have been untransportable at full scale, and may have plunged into the core of earth itself.)

The Tide has a battalion of these already, and a few more in storage. (The Mike Dubose statue is banned from public display under Alabama state law.) Florida is new to the extravagant statue game, but is catching up in a hurry. Recession, reschmession, bustas:

The bronze statues of Steve Spurrier, Danny Wuerffel and Tim Tebow are to be placed on the west side of Ben Hill Griffin Stadium. The full board votes this afternoon on the project. The statues cost $550,000, which is being funded by private donations. Athletic Director Jeremy Foley said the statues will likely be installed after Jan. 1, allowing the former players being honored to be there for an unveiling of the statues.

The Tebow statue should really just be a Buff Jesus statue with his head, but noooooo, you go ahead and spend that cash and not save it on a simple action figure that would do the trick.

There are no announced plans for the Eternal Flame of Markihe Anderson statue (constantly on fire and burning,) the Wilber Marshall Memorial (a 1,000 pound statue dropped randomly from a great height on opposing fans,) or the Jon Xynidis Special Teams Penalties Frieze, but we're working on getting all three approved with our "donations."*