TALE OF THE TAPE: SCHAD VS. BROWN

Share All sharing options for: TALE OF THE TAPE: SCHAD VS. BROWN 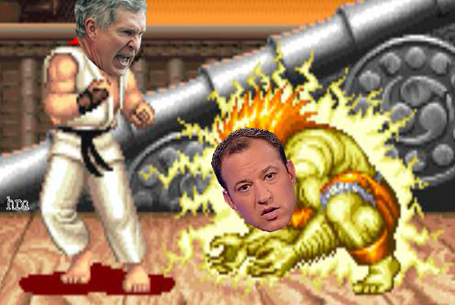 RECORD: Superb, especially since he mostly just regurgitates others' reporting without modification.

WHAT YOU DIDN'T KNOW: Showers with a suit and tie on. In his spare time enjoys using his blackberry and walking without looking where he's going. Briefly dated a girl from West Virginia, but broke up with her when ESPN execs informed him her home market was too small. Enjoys running and appearing in public wearing a huge digital display around this neck with the ESPN news crawl scrolling across it at all times.

STANCE ON TEXAS JOINING THE PAC-10: It's imminent.

FINISHING MOVE: "The Big Outro" A smirk and nod toward the camera, followed immediately by a fatal Blackberry-Slapping to the head.

STYLE: Muay Thai with Street Fighting, but with superb ground skills in a limited area (between Lubbock and Austin only); straight man on talk radio; wipes front to back with a half tuck and repeat to save paper; casual Dockers Academy Sportswriter School of Sports Couture; skin-care wise moisturizes frequently, since unlike Schad he has seen the sun this millennium.

WHAT YOU DIDN'T KNOW: Is merely taking dictation from Mack Brown and/or Larry Scott. May in fact be Mack Brown, Larry Scott, or both. Loves his kids, according to his Twitter profile, unlike you and your offspring hating ass, dickface. Before journalism had aspirations of becoming a tree surgeon, but developed a morbid fear of squirrels. Cries uncontrollably at the song "When I'm Gone" by Three Doors Down, which is why it's fair, legal, and encouraged for you to punch him in the balls when this happens.

STANCE ON TEXAS JOINING THE PAC-10:

FINISHING MOVE: THE BIG TWEET. Break story online, and when paleojournalists turn around to teletype each other about "WHO IS THIS GUY" in Morse Code, fire a ball of pure energy at them while screaming "HADOKEN"