USC AND THE NCAA: THE SMOKING CRATER AND WHAT CRAWLS OUT OF IT

Share All sharing options for: USC AND THE NCAA: THE SMOKING CRATER AND WHAT CRAWLS OUT OF IT

If you're wondering what it takes to make the NCAA mad, just point to USC and say "THAT." The most severe punishment handed down since Alabama's 2002 decision had to floor even the most cynical observer: the marquee program of the 2000s, perched on the edge of the continent and beyond the purview of most of the college football media's scrutiny, and protected by the bubble of boundless success and celebrity glitter received one carefully aimed bullet that came within inches of its heart before exiting.

USC will survive this, albeit not without massive blood loss. They'll have to crib from the Miami and Alabama blueprints on program reconstruction, since they may offer no more than 15 scholarships a year and have to take ten a year for three years starting next year, but that is doable provided you understand the pain those left in the wake of the program's near-execution. They'll have to eat any projected bowl revenue for two years, including the instant Rose Bowl dough that became a matter of direct deposit under Pete Carroll. They'll have to suck for at least three or four years, and climb through an uncomfortable muddle of mediocrity for another three years before considering a return to form.

They might even take the horrific step of losing to Stanf---scratch that. Twice. We might also find out if wunderkind-turned-doofus-bandit Lane Kiffin can actually coach, because he's going to have a steep challenge driving USC out of this shitpit. He won't, but if he does we'll eat a entire red velvet cake to atone for being so horribly wrong about him.*

It's a decisive punishment, but some rankling points that remain, however. Mike Garrett--or whoever is AD after Garrett-- has to sign off on any transfer requests from football players.Those student-athletes should be free to transfer without penalty or permission from the University in the event of something like this which diminishes their market value.

On a less legislative and more judgmental point, Reggie Bush comes off in the report as nothing less than a complete asshole: wheedling cash out of his business partners for a '96 Impala with rims and a booming sound system, "getting a big head" according to testimony and asking for more, refusing to cooperate with investigators and finally burning everyone involved in the case by ditching his prospective business partners--who, as demonstrated, wasted thousands of dollars on him--and torching his school's football program in the process.

We're sure there was an element of youthful indiscretion there, but this goes well past the limits of that allowance. You may think the NCAA's rules are absurdities listed numerically, and we would certainly agree in many cases with you. They are the rules, though, and to break them knowing the institution that brought you to fame, fortune, a plush pseudo-celebrity's ass, and a Super Bowl ring might pay dearly for your indiscretions in the end is either malicious, dumb, or maliciously dumb. We take a flyer on number three. 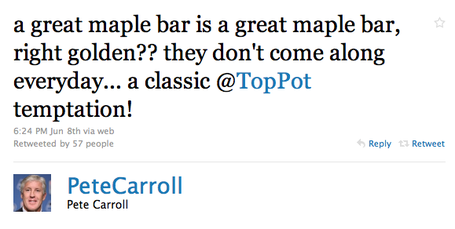 Note: We'll have something on various rumors either tonight or early tomorrow a.m., because it's all total crap right now even by our low standards.