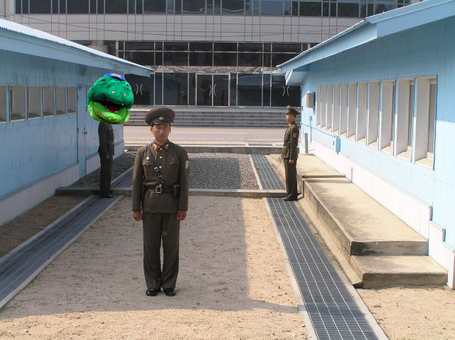 Even in the lull, however, you usually get the kind of stories handed out like evergreen MREs to starving reporters: the profile of a wacky lineman, a cursory study of the school's offseason conditioning containing the quote "They're working harder than ever" or "This is the hardest offseason ever," a profile of a position coach, etc. You get something, both because beat reporters are starving for content, and because SIDs and their like are happy to keep the wire warm in exchange for cuddles and favor later.

Unless you're Florida, whose current media relations standard is here. (WARNING: will cause a seizure in even the most hardened non-epileptic.)  This offseason has contained almost no extraneous Florida stories aside from the most gritted of teeth addressing the media during spring practice. No profiles, no chummy talks with coaches, and only the most sound-bite-free players offered for interview.

In fact, Jeremy Fowler's profile of Mickey Marotti's offseason training program--who's never had a problem with his annual appointment with the media, btw--is the first real piece we can recall since spring practices that wasn't a recap of a booster club meeting. Meyer himself has to talk at SEC Media Days, an appearance that will be his first since April, and even then his spring appearances were usually delegated to the same four position coaches over and over again. After that, we'd guess you won't hear from him until SEC Media Days in late July, where we'll all clamber over his every word like CIA analysts parsing North Korean press releases.

The Fowler incident didn't help, but if you'll notice now even Gainesville Sun pieces are written from a weird, speculative viewpoint about the program. Tiffs between programs and the media are commonplace, but the near-total freeze-out in Gainesville is weird, indeed. Meyer is either trying to out-Belichick Belichick as another gambit in the long motivational game he's playing with the team, or he's manipulating a takeover of the universe before surfacing as the last remaining Sith Lord and dismissing the Senate for good. Since we're Florida fans, we're naturally hoping for both.