The last source to claim inside information on the NCAA report was Dan Wetzel, whose normally spot-on aim mistook a rabbit for a bear's ass and missed the mark on an OMG HERE IT COMES report. We assume this has the same potential inaccuracy, since we imagine the NCAA works a lot like the CIA in that a.) no one knows the complete report, and is only working on it in part, and b.) sometimes they lose track of lots of cash.

Skepticism stated, let's move the needle up on the USC Death Penalty Watch (Brought To You In Sparkling DERP-o-vision) due to ESPN LA's report stating that Friday will be the day the report finally surfaces. 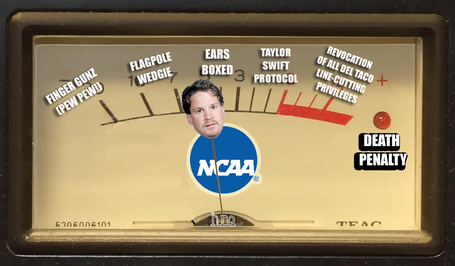 .Moving up the ladder here for a few reasons, the needle reflects our growing suspicion that if the report is so long and detailed, it efforts to string together the OJ Mayo and Reggie Bush incidents into a multi-sport pattern within five years of each other, meaning the NCAA has to do something. That something, of course, does not have to be anything substantial (see: "vacated wins" at the least,) but it does mean something behind the bro-hugs and fingagunz shot playfully across the bow we initially suspected.

A long report, we remind you, does not mean a long bill of goods for USC to pay for here. The Florida State report was lengthy as well, and resulted only in the vacating of wins in the end, though a good bit of that length may be attributed to the 73 autographed copies of The Bowden Way Florida State insisted on including in the report to boost book sales.

UPDATE: Yahoo's Charles Robinson is saying "book it" on the report coming out this week.