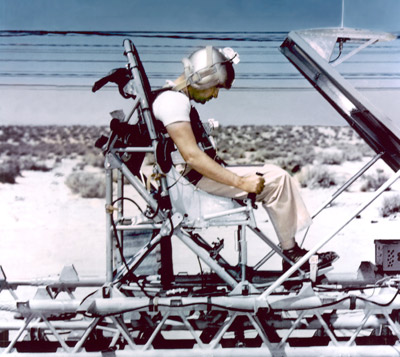 Building on the best of all possible themes--rocket sleds, men, and the men who strap themselves to them in the name of science and a streak of masochism so undeniable you can see the man's erection through his battered flight suit--we give you the patron saint this week, the flight safety pioneer, flight surgeon, and human crash test dummy par excellence.
Starting in 1946, Stapp served at the Aero Medical Laboratory at Wright Field conducting what was already badass research: testing the very limits of human endurance under the harsh circumstances of high-speed and high-altitude flight. It is a credit to Stapp that in a situation already rife with rocket sleds, explosives, decompression chambers, fire, and other awesome things, he sought out ways to milk additional adrenaline from the situation.
See, dummies really hadn't been developed yet, and instrumentation was still a bit crude, but Ivan's got nukes and a roadmap to Times Square so the great Bin of Drastic Measures we went, America. John Stapp reached in and pulled out the only one he could find: full on human testing at full fucking speed. This may seem like unnecessary profanity. It's not, since we're sure military memos at the time said "HOLY SHIT THEY WANT TO FUCKING DO IT THEMSELVES ROCK \m/"
/bangs head
It would have been unfair for Stapp to ask others to do this without doing it himself, but it would have been even more chest-hair sproutingly awesome if he did it himself and to an extreme that others dared not dream of in their most colorful dreams/nightmares. This, ladies and gentlemen, is precisely what Stapp did, subjecting himself to 26 trials of astonishing violence, including a rocket sled ride and full one second arrest run topping out at 630 mph.
After that run Stapp could not see for ten minutes after the accident, had dirt shot into his skin through his protective suit, and regained sight only to find his eyes were black with blood. There's video. You should watch it.

In addition to the "Gee Whiz" runs, Stapp also did high altitude skydiving runs himself, flew a jet with the canopy blown off at 570 mph with no ill effects, and hung to the landing gear of an F-15 with two dobermans latched to his genitals at a speed of 650 mph for reasons which have been lost to the mists of time. That last one may not have happened, but you can be damn sure Stapp at least considered doing it, and would have it if were necessary.

Stapp's work paved the way for an entire generation of aircraft, space craft, safety systems, and male pattern inadequacy felt by those who tremble at the thought of going too fast without a seatbelt, much less doing it in the name of science at 893,093 miles an hour. Unless you live past the age of 89 you're a double pussy, because that is how far along Stapp made it before colliding with the black wall of death headfirst, because that's how a man does it.

Salute. Now, to the hedonism.
DRINK.

Holly:  New summer jam cocktail, "discovered" yesterday, that will require some sort of Vawl moniker, 'counta it being orange and all. It involves Trader Joe's clementine soda and Bombay, and an orange or grapefruit twist if you're feeling fancy. In fact, since it's so sweet and all, I think I'm going to call it a Precious Cooler (notably not presented by Sapphire despite the unfortunate ginny pun). Look for it at discriminating hot-weather tailgates this fall.

Orson: If you see this: 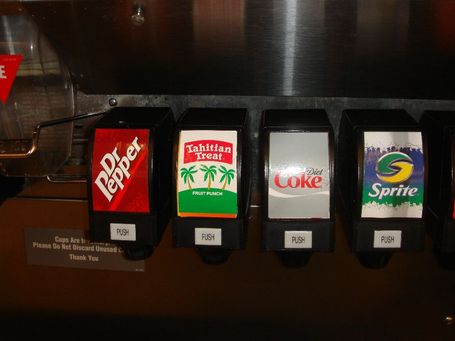 ...please call the EDSBS Endangered Beverages Hotline at 1-888-DIABETUS to alert us as to the actual availability of Tahitian Treat, a kind of glorified fruit punch shot through with carbonation still manufactured somewhere in this wide, mysterious world of ours with the ingredients we remember from childhood: corn syrup, the bones of coyotes, and truckfuls of moldy apples. I have no idea what actually constitutes Tahitian Treat, but I'll be damned if I didn't drink a gorgeful of the shit in middle school. If you know of its whereabouts, let us know so we can taste it and wipe the veil of nostalgia from our eyes before I remember it too fondly.

COMESTIBLE.
Orson: Chinese Breakfast. Not a literal Chinese breakfast, though dan bing on the right morning with a generous dollop of hot sauce and hot soy milk is far, far better fare than you would expect from a cuisine that generally rides the FAIL whale, breakfast-wise. Steinbeck's in Decatur, GA serves it: thick sliced braised pork belly and a pile of leeks cooked together and then served over nubbly jasmine rice with a perfectly fried egg blanketing the whole mess.
You may have noticed this contains pork belly, and would thus be good if you ate it after someone slapped it between two pop-tarts in a hot press panini-style and served it to you like a sandwich. True, but...I'm sorry, now I'm thinking about whether that would be good, and realizing I'd probably at least give the pop-tart panini a go, and then possibly eat the whole thing and order another, and...
Just try it if you're around. It's phenomenal, especially once you've gotten to the rice with all the pork juice and sauce soaked into it. 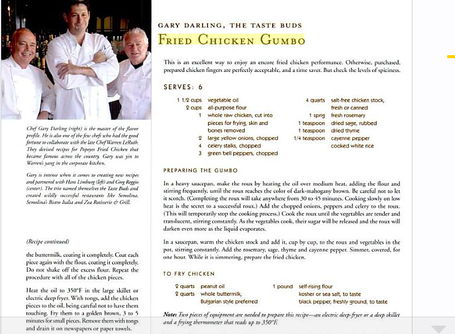 I neither know nor care whether this is AUTHENTIC CAJUN FOODSTUFFS, although I'm sure some helpful/righteously indignant Louisianian will be along to tell us all about it in the comments. What I am concerned with is the phrase "fried chicken gumbo", and that these gentlemen apparently think it can be made and consumed. We're like mountain climbers when it comes to things fried and edible: We're going to tackle them, because they're there.

Holly: How to make a giant match. 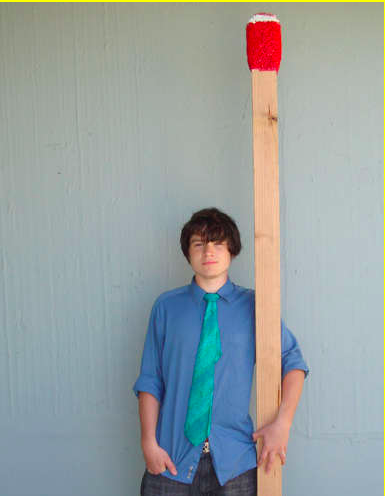 Don't say I never did nothin' for you. Try letting your kids fight with these in a pool instead of those bullshit foam noodles.

Orson: AC/DC made a lot of songs that, when played over large speakers, would cause volatile fluids and solvents to burst into flame. None of them were recorded with more hissing treble and evil hiss than "Whole Lotta Rosie"

It's funny enough to write a song Bon Scott described as being about "a fat slut" and make it sound like a compliment, but to make it sound like the producer had the amps plugged directly in the lungs of the Morning Star himself makes for truly flammable music.

The Ferrari 599 GTO, aka the car you'd most like to become one with after a 200 mph mistake made over a 1,000 foot cliff. Go try to find something genuinely negative written about this car. Sample excerpts include "as close to God as possible," or "the greatest Ferrari ever made." (The second is from Top Gear, and they hate everything.)

It's just heinous lust in all directions and in every mathematically manifested sense of the word: 670 hp V-12, 0-62 mph in 3.35 seconds, a top speed of over 208 mph, and a price tag of $500,000. This may seem expensive, but jets are rarely this cheap outside of Soviet fire sales, and the maintenance plan on a Sukhoi sucks. (Trust us. What do you think a scholarship kid takes out loans for, anyway?)

It's only missing a Fleshlight mounted in the tailpipe to allow proper consummation of the relationship. Otherwise, it's perfect.

Holly:  Long before Hummer devolved into nothing more than another way for soccer moms to look ridiculous wasting money -- actually, long before anyone outside the Pentagon could buy a Hummer, period -- Lamborghini had the innovative idea to take a military transport prototype, drop in the V-12 engine from the Countach, and sell it to the general public as the world's most roided-out SUV. 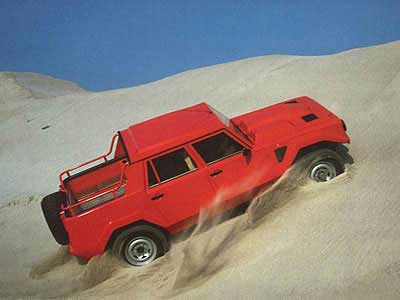 The result: the Lamborghini LM002, a three-ton, 130-mph fortress of a car that is a force to be reckoned with whether you're wading through hostile LSU fans looking for a tailgate spot or merely trying to survive a zombie apocalypse.

Holly:  Speed. Jan de Bont's 1994 directorial debut was the first R-rated movie I saw in theaters, and the first feature film written by Graham Yost, who's currently making a living writing a certain Tuesday night Appalachian lawman drama that has every EDSBS staffer cooing in its cowboy-hatted clutches. It's the movie that made Keanu Reeves an action hero and attempted to make one out of Jeff Daniels, but it also features Dennis Hopper as a crazy person, which makes up for a lot.

Why it has sentimental value: Sixteen years after this movie's release, I moved to Los Angeles, and in all my time there I didn't get drunk with any famous people or get in a fender-bender with a Lohan, but I did end up living in this building, seen in the opening elevator-bomb sequence. 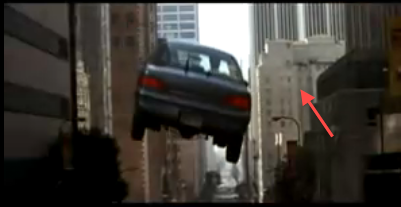 Every so often, the universe provides.

Orson: The Savage Sword of Conan. 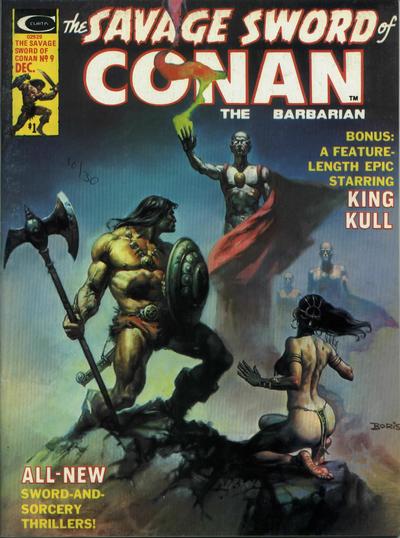 The black and white comics look like they've had a Mastodon album poured into them, with plots full of ghostly temptresses, blizzards, blood, frost giants, swordfights, more blood, witches, sinister landscapes, and everything else Mastodon and a thousand other doom-obsessed geeks glommed from comics like The Savage Sword of Conan. It's hilarious reading, especially if you imagine Arnold saying it all in his pre-Hollywood Austrian accent. I'm particularly fond of this dialogue:

Man: Why do you worship this god, Crom?

Conan: Because he always answers my prayers.

Conan: HE ALWAYS SAYS NO.

Get your geek on, and remember why you have masculine body dysmorphia in the first place. If they're not making sense, go hit the freon off your AC or smoke some nutmeg, and it'll all make perfect sense.