ANATOMY OF DRAFT NIGHT: THE POUNCEY TWINS AND GUEST

Share All sharing options for: ANATOMY OF DRAFT NIGHT: THE POUNCEY TWINS AND GUEST 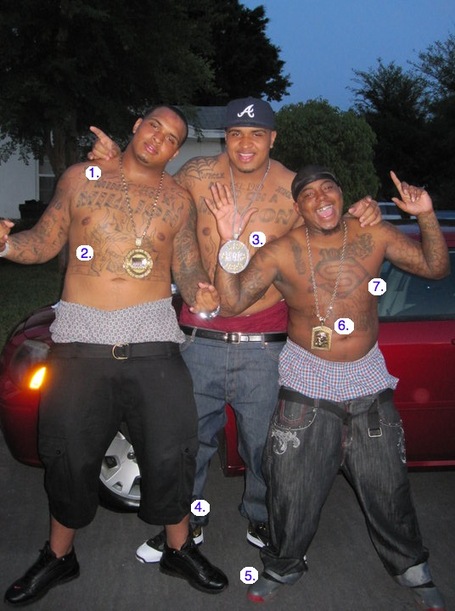 1. TATS. We knew the Pounceys, who rank among our favorite players to ever suit up at Florida, were tatted up, but damn: someone had coupons about to expire at the ink parlor and used them all at once. The chest tats read "Mind on a Million" on both Mike and Maurkice, which is either the name of their fledgling record company, a statement indicating their intention to be mindful accountants BALLIN' OUT OF CONTROL, or we've read it wrong and it says "MIND ON A MULLION," reflecting their deep passion for door installation.

2. BELLY TAT. Mike appears to have what we can only guess is a Trogdor the Burninator tattoo on his stomach. If so, we admire the commitment to internet humor tropes, since we have a Peanut Butter Jelly Time Banana on our right ass cheek, and now have to endure having something in common with slugjawed Family Guytards. This and our Dramatic Chipmunk tattoo should be warnings to you all. Hey did you get that from Family Guy--SHOOTS YOU IN THE MIDDLE OF THE ATLANTA AIRPORT FAIR AND FUCKING SQUARE.

3. MANHOLE COVER. In addition to a pair of Hei Ji Industries Knobhanger Slacks for Men (mercury poisoning lawsuit pending,) Maurkice has the same blinged-out manhole cover around his neck that he wore on the televising of his draft selection. Mike has Knobhangers'  manpris on and is daring you to say something about it. Remember: they're not pants if they're not holding on to your cock for dear life like Frank Drebin hanging off the side of a building.

4. MANPRIS. It still counts if you're wearing rolled up pants: they're manpris, and do not even attempt to deny it.

5. SHOES MADE OF DUCT TAPE. Resourceful, innovative, and stylish, Ashy Larry here is blazing new trails of fashion adventure all by himself.

6. INTERPLANETARY BLING. Not many people are willing to combine their love of tabloid astronomy and oversized ornamental jewelry, but Ashy Larry just had to share his passion for the Mars Man Face.

7. MOST INCONGRUOUS SUPERMAN TATTOO EVER.