UNSOLICITED ADVICE FOR ALABAMA FANS 2010: IT WILL NOT BE FUN

Share All sharing options for: UNSOLICITED ADVICE FOR ALABAMA FANS 2010: IT WILL NOT BE FUN

As a failure at so many things in life, we know the keys to finding what will make you successful. Simply write down all of your traits. Then, compare this set to the universal sets of human attributes. Whatever you lack is what is required to be successful. This likely will not change, so cope by having a beverage and watching some low-grade basic cable reruns.

Assume then that the inclusive bubble of "your traits" and "Nick Saban's traits" do not overlap. After all, he is very successful, and you are reading this blog. If they do, it's likely the part reading "likes oxygen" and "has an office" that overlap, and you should know that those don't count for much. His football team's offense bore the shit out of us, his often conservative play with leads chaps our ass, and his occasional murders of his underlings are distasteful.

Let this be known: his football teams are always excellent and prepared, and as a coach he has few proper peers. You will read this sentence in eleven thousand different variations this spring and summer: If anyone can do it, Nick Saban can. Hey, look: there's one right there.

Managing a talented team coming off a national championship is not easy. Saban is one of a handful of coaches who can do it well.

All true. Matters will be made worse when people construct their polls with third grade math procedures, i.e. the "carry the one" approach where last year's finishing order become's next year's top 25 without consideration for personnel losses, the schedule, or the most unquantifiable but insidious factor of all, creeping laziness and entitlement.

As someone whose team recently suffered from all three in an abortive attempt to repeat as national champions, we'd like to help you prepare ahead of time for the experience with some sanity-saving reminders from a fan base who sweat blood last year waiting for something that didn't happen courtesy of...your team, actually. The worst and most unavoidable part comes last.

1. New starters will hurt you. Everyone counts. If you don't think Rolando McLain McClain won't hurt, you are incorrect. If you don't think replacing Javier Arenas and Karim Jackson won't hurt, you are incorrect. There will be no dropoff in talent, true, but experience is unrecruitable and irreplaceable. The loss of Phil Trautwein mattered on the offensive line for Florida; so did the loss of supreme chess piece Harvin, receiver Louis Murphy, and the departure of Dan Mullen to Mississippi State. With something as chemistry-dependent as football, losses matter.

All summer this criticism will be shot down with "but but TALENT OMG," but it still adds up in a way that should terrify Alabama fans like nothing save the glowering ghost of Bear Bryant himself wondering why you're drinking Franzia, and not that fine brown liquor should be drinking, young man.

2. Returning starters will hurt you. This is another sad truth of dealing with young, inconsistent athletes engaged in sportive activities: someone will disappoint, someone you counted on as a bankable, solid asset. For Florida this was Tebow, who struggled against SEC competition in 2009 and at times appeared to be a completely different player under pressure. By default this person for Alabama will be Mark Ingram, the returning Heisman winner who can't possibly equal last year's glory, and who might see fewer carries with the rise of Trent Richardson at running back.

3. You will have a Whiskey Tango Foxtrot game. You might win it, true: but it will be there, a game where half the team refuses to show up and the other team plays like their balls are on fire and you're holding fire extinguishers. For Florida last year, this was Arkansas, a game we won but became the blueprint on how to play us for the rest of the teams we faced in 2009. On at least one weekend (probably during an early kickoff) you're going to get your ass kicked unexpectedly, and even if you win you'll be more stunned than relieved for a week or so.

4. Someone wants to kick your ass more than you want to kick theirs. See: "SEC Title Game 2009, Florida sideline." Someone out there is waiting: Auburn, or Florida in a hypothetical SEC title game matchup, (or, you know, in the regular season game we completely overlooked in the first pub of this) or LSU, or someone else out there on the jungle floor, someone who's more familiar with the acrid stink and sting of a fresh loss.

5. You're entitled. No amount of mindgaming, psychological machination, or basement car battery torture sessions will change this. Aristocrats don't mean to end up on the wrong end of guillotines: it just happens because your perspective changes so much when you assume privilege that you don't see it coming. Mike Leach never lies: some of those motherfuckers think they won last year's games, and that the coupons may be redeemed for wins this year. 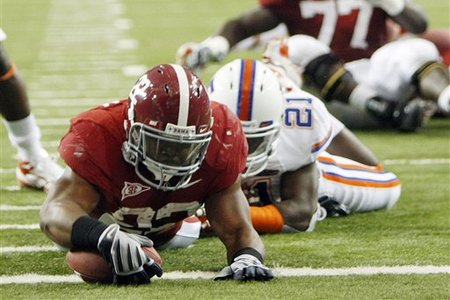 Florida had those guys last year. You do too, and if you're fortunate Nick Saban will identify them and have them reprogrammed at a secret labor camp outside Arkadelphia before the season starts. If Nick Saban could take a mallet to each of his players and erase the memories of the past year, he would. If you see him with a hammer heading towards the football team's favored dorms, please stop him, because this is physiologically impossible to do with a hammer, and because even he might not be able to beat seventy counts of assault in the state of Alabama's court system.

6. This won't be as much fun. It never is. Success spoils success, which is why successful neurosurgeons tell their therapists that, beneath it all, they are terrified of being unmasked as frauds. The next year will be nothing but anxiety haunted by the exaggerated memories of last year. Thus the suck begins: this team has done nothing wrong or right yet and has already disappointed you.

You've all become Pitchfork critics now, and nothing will ever top last year's masterpiece. We wish there was a solution for this, but there isn't. You are Jimmy Stewart in Vertigo for the next year, and you will ask this year's lady to dye her hair to look like the last even if it is creepy.

7. It will still likely be more fun than almost any other team's season next year. Alabama will still likely win nine or ten games, and any and all complaint about disappointments will be dismissed (rightfully) as a spoiled trustafarian complaining about having to cancel his winter trip to Gstaad because "Dad's checks won't clear until the 15th." You are allowed no self-pity. Don't even try it: you'll get to the third world of your comment online, and your computer will explode.

8. Deny all of the above. You're likely going to do it anyway, since that is precisely what we did.