SPRING GAMES THIS WEEKEND WE MISSED DUE TO GAMBLING

Share All sharing options for: SPRING GAMES THIS WEEKEND WE MISSED DUE TO GAMBLING

West Virginia had the rather unusual Friday night spring game, and the scheduling yielded the biggest spring game attendance not just in West Virginia history, but in the history of the Big East conference. If current trends hold tight re: conference expansion and the conference, this will be the record forever. Congratulations, West Virginia! 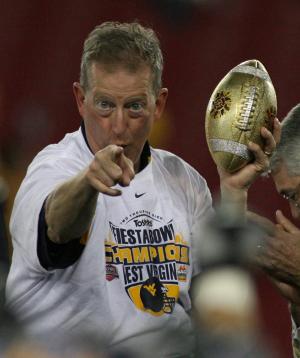 The first-stringers beat the second-stringers 38-0, which Bill Snyder says is half-stepping your proper lopsided beatdown of your fellow teammates.

No, Oregon head coach Chip Kelly is not going to divulge his starting qb after the Spring Game, though sophomore Darron Thomas had better numbers (15/23, 196 yards and a TD) than Costa (7/13, 104, 0 TDs). Addicted to Quack has a slideshow in their fanposts covering tailgating and the actual game, and please note that the Pacific Northwest was brilliantly sunny while the rest of the country sought shelter and stumbled through shin-deep mud.

Oregon State held what was more like a glorified scrimmage, but Building The Dam has a nice breakdown nonethelessof a scrimmage where Jaquizz Rodgers saw a familiar sight: an offensive line occasionally punching holes for him, and occasionally not punching anything like a hole for the brilliant microback. UVA transfer Peter Lalich looks like the early leader for the starting job vacated by the departing Sean Canfield.

Matt Barkley's hand met the top of a helmet during USC's scrimmage, allowing Mitch Mustain to come full circle from "spoiled kid Houston Nutt had to keep in line" to "future third-string USC punter" to "okay, maybe all qbs are doomed under Houston Nutt, and Mustain's actually now an underdog, and my we're just confused now." Mustain went ham with 299 yards and 5 TDs in the scrimmage, allowing you to do what everyone does in spring scrimmages:

a.) My god, the USC offense is going to rip some ass this fall.

b.) My god, the USC defense is going to get its ass ripped this fall.

Conquest Chronicles has the most important news of the day, however:

You could hear coach O from the nosebleed section